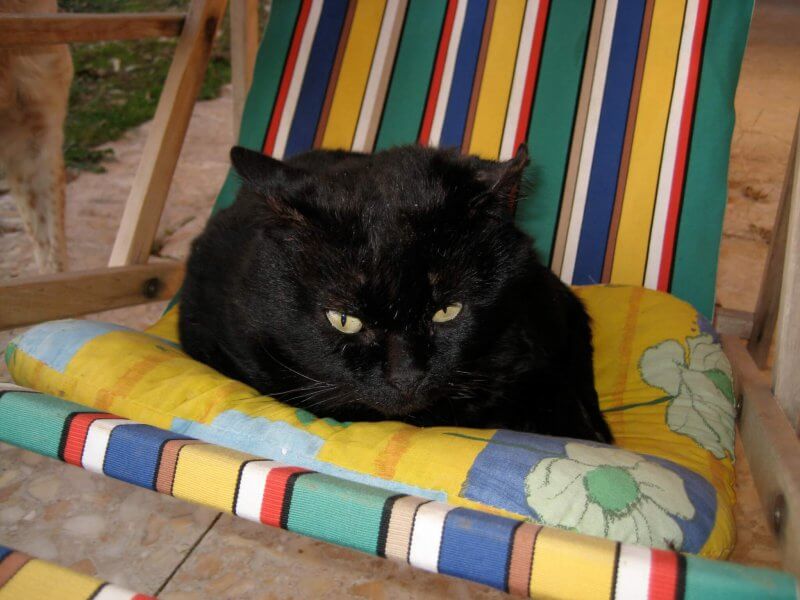 Before I got introduced to the magic world of normal house cats, I though that cats are just catsI Some people say, cats are false and they try to scratch you whenever you come near them and that this is just how cats are. Presently I live with 5 cats after having had more than 40 or so in the past which had brought me to the understanding that cat personalities are very different, maybe as different as human personalities. 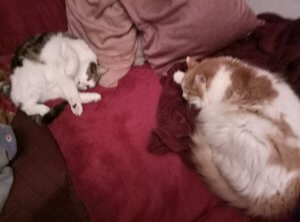 While I am writing this, Sunny, the Prince-cat, lies at my feet snoring, Luzzy, the beautiful red-and-white furry cat stretched out nearby wondering, as usual, what is going on (he is not the brightest, but very sweet!). Ah, yes, he comes up to see me typing into the computer and back to claw the blanket.

Trixi is stretched out on her usual stool in front of the warm fire, letting the day pass by as usual without much ado. But now, the red cat “Mundl” comes and places himself between her and the furnace. That is not good, she thinks and gets up to go to the rug to sharpen her claws. And what does Mundl do? He jumps up on HER chair and takes over her territory. 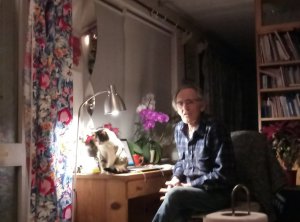 Who is missing? Sure, the blind cat Kittie. Easy to find: she is always near Mark, or on his lap or sitting right next to him on the desk. Here she feels safe and appreciated while everywhere else she has some difficulty with fitting in. Why? 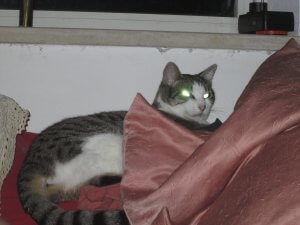 Well, she is blind and that makes her totally different from all the other cats. She behaves differently in many ways. It can happen that she bumps into someone lying on the floor and this someone normally reacts astonished and annoyed. If it is the dog Lucky, who has got used to this somnambulistic creature and doesn’t care much, but the cat family members don’t like her and try to stay out of her reach. Believe it or not, but the blind animal has learned to “see” in some other ways, she can sense some other cat passing and then jump on it and flail it with her claws!

An aggressive blind cat? Isn’t that strange? Wouldn’t you expect a shy creature well aware of the limits of her handicap? Not really! She learns in no time where we have positioned the chair to accommodate the 15 year old Trixi’s jumping up the table where we feed her in order to make sure that she and no one else gets her special food, especially not the dog who eats everything in 3 seconds. It takes not even a day and Kittie finds out how to reach Trixi’s food and when I notice it and shout on her she jumps down from the table in one jump, no hesitation, no insecurity. And if she should jump into some obstacle she just deals with it. Just get out and go around, even if you have banged your head, no problem.

This is my chair!

Mundl has taken over Trixi’s chair. She doesn’t like it and forgets her normally peaceful nature…

Mundl was an outdoor cat until last year when Mark seduced him to come into the house. He slowly has opened up to us and has given up his nervous anxiety to flee, exchanging it for a constant desire to go into our bathroom – to get his special food there. When it is very cold at night we allow him to stay there – and good that it is the bathroom as his habit to spray his gives “less unpleasant” noticeable results than when he chooses the shower stall instead of our sofa. Neutered tom cats are said to not spray around, but obviously when they live long enough outdoors they nevertheless develop the habit of marking their territory. Strangely enough, also female cats do that sometimes, like Snow White did (I have written several stories about her in this blog!).

Did you know that every cat has a different quality of fur? It is not only the color and patterns which are different, but the texture of the fur. You might say: sure, there are cats with short fur and long fur. But this doesn’t really matter when it comes to the tactile impression you have when you stroke them. It is difficult to find words for that. Some are more like silk, others like wool, others like horse skin, Some feel like dry and fuzzy, others like oily and smooth. Although this is not part of their personality it makes a difference to us humans in our interaction with them.

So let’s take the touching to explore the personality differences. Mundl comes to me in the bathroom, sees my hand, comes near with his head, but before I can stroke him on the head he turns around and I get his back while he moves away so that I grab his tail which floats through my hand. He enjoys when I pull him a little on his tail, then turns around and the same game goes on several times. When he happens to be near us on the sofa, after more than a year of being allowed inside the house, he came to have enough trust in us to offer us his belly for stroking. He definitely likes it but is still a little uncomfortable with exposing himself so much.

On the other hand Luzzy: when I begin to stroke him while he is on his feet, he with a considerable plump falls onto his side and opens up his belly for further stroking. He enjoys me working on his curly white belly fur with both my hands, his eyes open with a distant expression as if he is in a deep and pleasant meditation. He never gets enough and I could spend the whole day rubbing his belly and using his state of positive immersion as I pick sticky seeds or other stuff out of his fur. 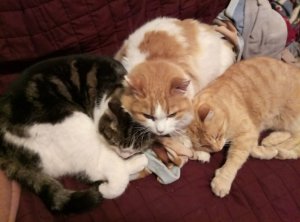 Much different with Sunny. He has basically 2 very different moods. Either he is a warrior and ready to grab you with his claws and bite your fingers – although not willingly hurting you -, or he is sweet and totally receptive and enjoys to be stroked. But only on his head and back. As soon as I touch his belly he has this automatic reaction to contract and hold me tight, sometimes in ways that it is really hard to convince him to let me go without some bloody imprints of his claws. The good news is that this never happens as long as you don’t voluntarily draw back your hand and get injured this way. If you leave your hand there and just wait until he lets you go there is no harm done. 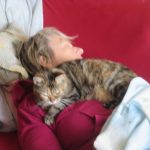 Trixi likes to be stroked, everywhere. Her fur feels a little rough, not so pleasant to have your hands in as for instance is the case of Luzzy. But she rewards you with her deep purr and with licking your hands – or whatever you offer to her. The special relationship I have with her is expressed in her jumping up on my body with a sigh-like sound to lie on my chest during our usual afternoon nap. The other cats, lately, have discovered this opportunity and jump up too, especially Kittie. She is Mark’s cat and so I send her to him and keep my chest reserved for Trixi. She is surely grateful for that. She needs to be defended because she habitually draws back and lets the others have their way. As a result she gets very nervous and, sooner or later, starts to poo outside the litter box. Since I have discovered this particular behavior pattern I take good care to defend her position against the rest of the cat family. 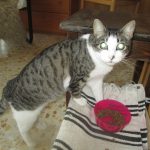 It’s time for feeding the creatures now. They are beginning to wake up and do their evening toilet. The bell will ring soon for them, the promising trinkle of their dry food in the dish will call them, everyone to their bowl in their specific space with their specific food!  Oh, bother!