The importance of TRUST 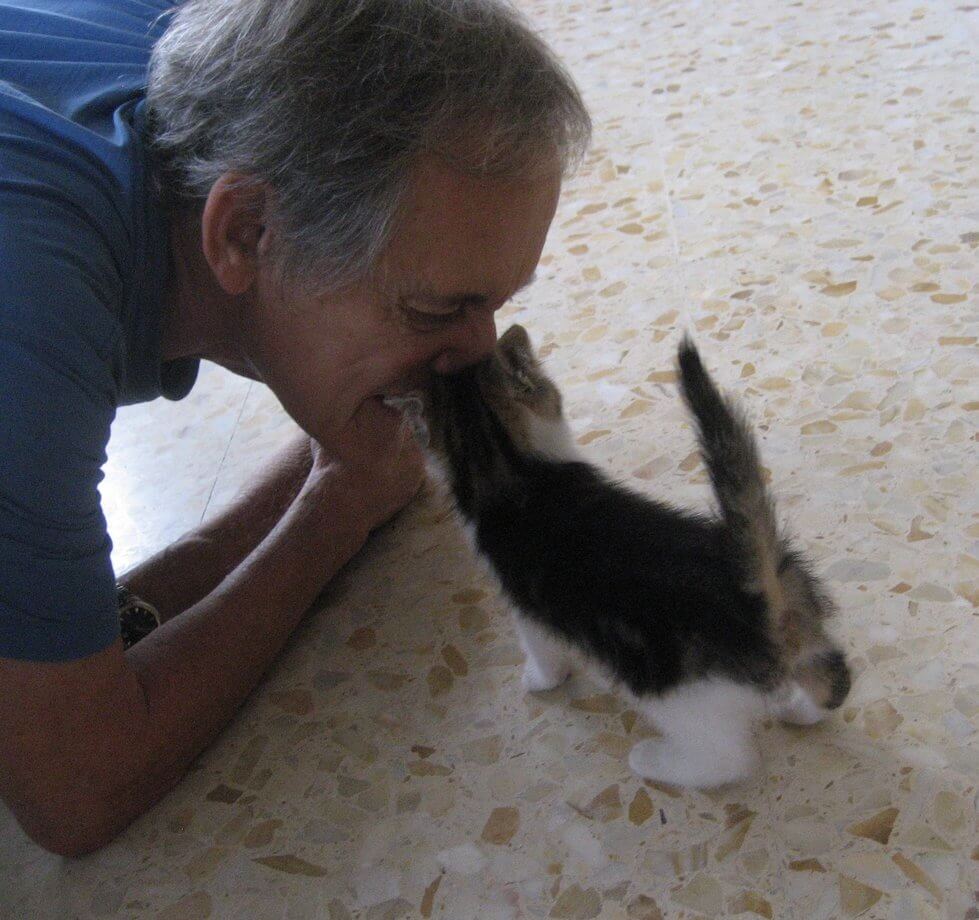 Trust – an important factor in our relationship with animals.

When we talk about “trust” we normally think about human relationships, between friends or family. But it is not so much different with animals, surprisingly. Today I want to tell you about my learning curve with trust regarding my animals.

Almost 30 years ago, when a friend of mine brought me a puppy as a gift – she was very much into animal protection then -, the little dog which we called “Pezza” because of her black-and-white patchwork fur, disappeared immediately under the wardrobe and stayed there for several days. 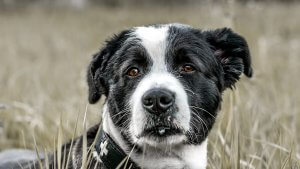 A dog similar to Pezza

With food and friendly words, we finally convinced her to come out. Her timid behavior led us to the conclusion that she had had some unpleasant experiences with humans in her short life.
But slowly she developed a pre-form of trust: she didn’t hide anymore right away when confronted with unusual moments – also because she grew too much and couldn’t crawl underneath the furniture anymore, but she always held back and hardly allowed anybody to touch her. I didn’t mind as, then, I wasn’t myself yet very familiar with animals and not too excited about touching them and getting dirty hands. Which means that, if I had made more effort to improve the relationship, she certainly would have been able to be more trusting of me. Her life was short. In those days the local hunters distributed poison in the woods and I lost her and many other pets that way.

Animals can understand you

In those times I had many cats because I didn’t neuter the females yet. As a consequence, they were half savage and lived outside the house throughout the year. Some of them hung around during the day, others showed up only at feeding time.
There was Susi, a black cat, and daughter of my very first cat, Macchia, with whom I had to learn my beginner’s lessons. With Susi, I was already a little better in cat-communication and it turned out that we liked each other. Susi came to me and I could stroke her and I lost my hesitation to do so. 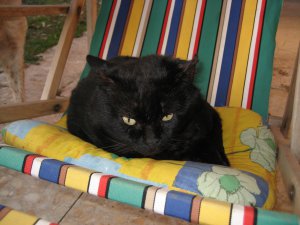 Well, one day I heard horrible noises behind the house, the chickens and pigeons there were upset, something horrible had happened – I actually don’t remember what it was, it was more than 25 years ago – and I entered into tilt. I was so completely upset and must have concluded that Susi had been the perpetrator – and I hit her on the back with whatever I had in my hand. Only after a minute or so I realized what I had done and that Susi had nothing to do with it and I regretted my action a lot. Susi had run away and hid for several hours. In the evening she was back, I apologized for what I had done and she seemed to have understood my exceptional mood and that I didn’t want to hurt her, although I actually did. The trust was not broken and I was very happy about that.

Now jumping to another kind of animal briefly: 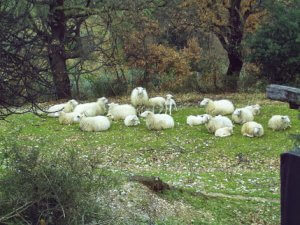 I had sheep and when they had lambs I learned that it was important to check the mothers’ teats to make sure that they have milk. You cannot imagine how hard this was. Sheep are very easily frightened and it took me a lot of time and innumerable attempts to be able to come near and touch them without being kicked. When I began to milk them regularly their trust grew and it became easier for me to be with them – while with the rams it was always precarious, I, myself, didn’t trust them at all, after several unpleasant encounters with their sort. And I guess they didn’t trust me, either, and they often treated me like one of their ewes, trying to chase me along. At a certain point I gave up keeping sheep, it was too much work and too many worries which couldn’t make up for the beautiful moments observing the lambs jumping around and playing.

Then there was Filippo, one of the sons of Trixi who always was and still is a very trusting and sweet cat.(Read about Trixi here and here). Filippo was one of those cats who preferred to keep a certain distance and wouldn’t approach to be stroked at all. He was diffident of people, I would say. 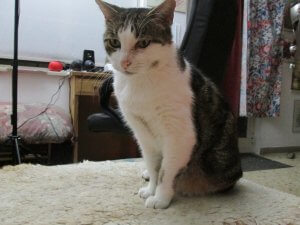 I am not sure the reason because his siblings were less strange with us. Anyway, my then husband decided to gain the trust of Filippo, step by step, and the miracle happened. 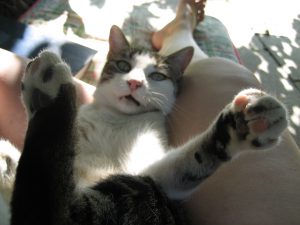 Filippo loves to lie on my legs

One day he jumped on my legs while I was lying in the sun and from then on he regularly was near me when I was sitting or lying outside.

Only when my present husband Mark arrived were all cats invited into the house – to the detriment of Tommy, my special cat (read here about Tommy). Filippo soon felt comfortable to lie in our lap – and in the warm room in winter times. When he became ill his trust in us grew ever more, and it had already been unusually high before. During his last days, he was always near us on the sofa and he died in our arms – happily, I would say. Read about Filippo here)

Then Lucky Fortunata arrived, the lucky puppy who had followed us, abandoned in Rome, and whom we accepted and brought home.

And she was also introduced into our living area – and Tommy didn’t like that at all. The short video I had taken then was quite a shock to me when I re-discovered it lately, after all, that had happened to Tommy a few months later. If I had read in the right way the signs he gave me then and which I could now see in the video, I would have taken more care of him instead of expecting him to just get used to the new situation without my support. That was the moment when Tommy lost all his trust in me and what consequently led to his premature death. I was not at all aware that animals can be as sensitive as humans and that they are struggling when they lose trust in the human they were so deeply connected with as we were. It was a sad excursion into studying cat-psychology! (read Tommy’s story here).

How Lucky learned to trust us

Back to Lucky. As a puppy, she was easy to handle. Growing up the difficulties arose which we tried to encounter with more or less helpless actions: shouting at her when she didn’t obey and thinking of all sorts of tricks to get her to do what we wanted her to do: especially come into the house for the night instead of staying out and preventing the neighbors from sleeping with her continuous barking. So, unknowingly, we made her lose trust in us and she ever more disobeyed us in fear that we would keep her in the house or bind her with the lead as soon as she would come in. We ended up calling a dog trainer and she taught us the right things to do.

and she taught the dog to be trusting, first in her, the dog trainer Deborah, and then in us. She used positive reinforcement and her own love and trust in dogs and now we have no problem with calling Lucky in a night.

What we can learn from our animals

What I learned from all these experiences: We humans often underestimate animals. We believe that they are somehow primitive and much different from us. But no, they aren’t. They resemble us much more than you would imagine if you had never had these sorts of experiences. Animals are emotional creatures, they feel pain and joy, fear and trust like we humans do. Unlike us, they have no possibility of reasoning, of talking themselves out of fear and of doing some exercises to get rid of stress. They are forced to go through the full emotional cycle and the conclusions they draw from their experience cannot be negotiated and reversed in the same way as with humans. But yet, also humans can die from a broken heart – and this is also the case with animals as it happened with Tommy.

So the deep learning is here: treat your animals as you would like to be treated; with respect, sensitivity and trust and help them to navigate difficult emotional situations. Don’t leave them alone in their despair – as you also should assist humans to get over emotional breakdowns. There is no difference. And this new understanding requires from us a different mindset and a different behavior. Animals are not things but soulful beings who have dignity and the right to be treated not unlike human beings.

10 comments on “The importance of TRUST”