A love letter to Sunnyboy by Mark Davenport 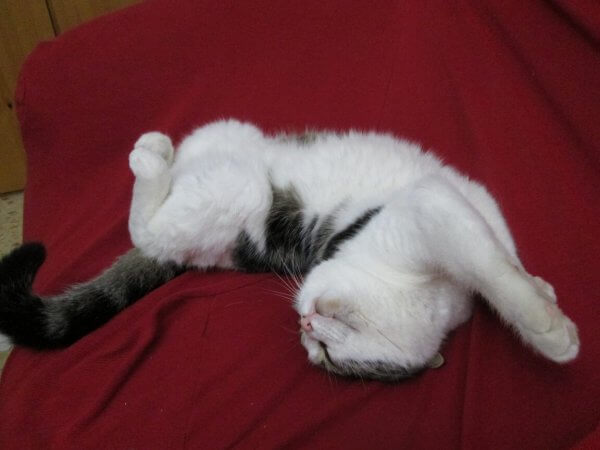 Early on a chilly morning this November as Heidi and I were crawling into the car, I heard a tiny mew coming from across the street where an old feed mill was located.  I could not resist that plaintive little voice and we discovered a two month old kitten among some trash surrounding one of the towers.  It seemed clear that he (as we learned a bit later) was lost or abandoned so almost without discussion we put him in the car with us and took him home.

Sunnyboy arrives in our home 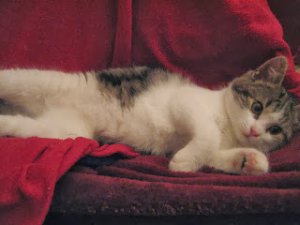 Sunnyboy as a kitten

He showed his colors even on the ride home, becoming calm and curious within a few minutes. Once at home, rested and fed, he began to meet our other cats.  He was fearless!  He did not expect any problems and so met very few!  His “in your face” curiosity about the world and all its inhabitants won our hearts and our admiration at once. We were witnessing the irrepressible urge of life to grow and expand and fill all voids with energetic and chaotic activity.

We may have been concerned about how the resident cats would react to him (and each did so differently according to their own personalities) but he was not.  The whole world and all it contained were his to chew, climb, crawl into or up, hang onto with needle claws, or try to eat. Many parts of the world and many of its creatures resisted his relentless investigations, but his persistence was irresistible.

We soon understood that his energy was, if I may say so, impersonal.  That is, not a function of that animal we soon named Sunny Boy, but a natural force, a way of being in this world, a kind of intelligence that would sooner or later grant him his glorious reign in catdom…or destroy him if he blundered into the wrong circumstances, or perhaps worse, gradually rebuff him so that his boundless curiosity might become, if you will, bound, domesticated, tamed, shackled, replaced by a dispirited drudgery. 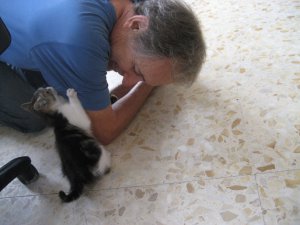 It’s now nearly two months later (remember, this post was written about 3 years ago! Now read about Sunnyboy for instande HERE or HERE or HERE, note by the editor) and he has easily doubled his size.  We have to look twice to be sure he’s not one of the ten year old toms with the same coloring.  His spirit remains intact, though tempered somewhat already by intelligence and experience.  By that I mean that he does understand “NO!” but that does not deter him from immediately searching for a way around the prohibition so as to do what he had intended to do anyway.  Or he will quickly be distracted by some other rolling, bouncy, juicy, reactive, or whatever it may be that he finds in his way next.

He has no sense of guilt, though he seems capable of some kind of embarrassment if he miscalculates a pounce or is thwarted in some way.  We have some older cats who need special diets which he finds very tasty, so keeping him out of the room where they eat is a continual task.  Today I had to toss him out while entering the room and again while exiting.  His reaction to this was to vigorously attack a loose insole in one of Heidi’s shoes.  Had he first encountered another cat, or me, we would have caught his anger and frustration.  But the energy from his disappointment was soon expended upon the shoe insole.

Both Heidi and I, separately, have raised many cats in our lives.  Sunny Boy is our first joint “pet parenting” project.  In fact we are learning a lot from this “impersonal “ force running around our house and yard (in ever expanding circles!).  We see something that we have to some unfortunate degree lost as we grew up: a way of encountering life with gusto, with endless curiosity and pluck. Sunny Boy doesn’t ask permission.  He just acts and watches the universe’s reaction, makes necessary adjustments and continues on his way.  True, he is amoral in the usual meaning of that word.  But he is deeply pre-moral, in a sense, in his lack of judgement, blame, or even criticism of his world.  He accepts and learns and just goes on…and on, undaunted-

What Mark learned from the relationship with Sunnyboy

His example is infectious.  He is showing me how limited my world of fears and worries is, how circumscribed my own boundaries of impressibility are, how I stop long before the world even thinks of stopping me.  I need to allow that same “impersonal” push forward to be expressed through me, accepting whatever I bump up against “out there” to react however it will but without letting that reaction deter me from what I need to make manifest while still alive and kicking.

I’m not advocating Sunny Boy’s “pre-morality” for myself, of course. The discrimination that a sense of right and wrong, understood differently as I have matured, is part of what my native energy has encountered and navigated with varying degrees of aplomb over the decades.  My life is more complicated than Sunny Boy’s can ever be, but may it never be less than it might be through unnecessary limitations in curiosity and courage.

Thank you, Sunny Boy. Grow and prosper…and remind me how. 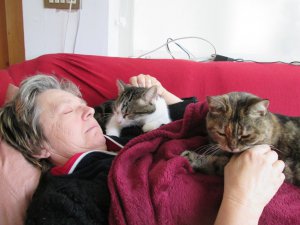 Sunny has developed into a very vigorous (fixed) Tomcat. He is still a little what we then called “autistic” as he often treats us like a piece of furniture or a food box and very rarely enters into deeper contact with us. Whenever you touch him he has the immediate reaction of biting and clawing, but then, normally, controls himself.. But still, it often is difficult to liberate oneself from his grip without being hurt by his super sharp claws.

There is an exception, though. In the evening, when we lie on the coach, he often humps up and places himself on my chest, sometimes slipping down on one side, and he offers his head to be stroked and stroked and stroked… He is in a very special mood then, when he also bangs his head against your forehead. Marks gets more bangs than me, but I get more occasions to stroke is head when he lies on me in a very intimate and trusting way.

He has become very good friends with Grandpa Luzzy who, at the very beginning, was not impressed at all by the juvenile attempts of Sunny to bother everyone around. He is happy to be taken care for by the old guy and abandons his tendency to fight completely. Enkoy the short video!