What cats can teach us about emotions

We humans often have a hard time when it comes to emotions. Most of us in the western world were educated to not show our emotions, to suppress them, or better, not have them at all. But we are emotional creatures like all mammals whether we like it or not.

Animals don’t have a way to hide and suppress their emotions, you can see them in their behavior, in their body language. Some animals can be “tamed” in ways that they don’t act out their spontaneous behavior patterns and resist emotional stimuli. This works for instance with dogs or horses; some learn better than others. With cats, it seems to be almost impossible.

We humans learn from our interaction with our animals – if we are inclined to do so. They can teach us a lot and remind us of our hidden nature. Today I want to tell you a story about Rosenrot, a totally red Tomcat who was given to me as a kitten many many years ago.

The Story of Rosenrot 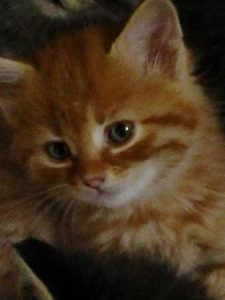 I was very fond of this beautiful red fur ball which then was hardly bigger than my open hand. I took care of him and watched him grow with much delight. These little creatures are so funny, they make us laugh when they try to scratch their head and fall over on their butt because balance has to be learnt by practice, not unlike little children. He mastered his awkwardness quite quickly and he grew up into a slim and slender beauty who was very attached to me. We had our love time every day, he trusted me and I had confidence in him that he would not become one of those nasty Tomcats who lose their ears by fighting with others.

In those days all my animals lived outside my house which is embedded in the beautiful hilly countryside of Umbria in Italy. So all animals could have their own habitat and live as naturally as possible. That is what I thought, but underlying I seemed to expect they would be domesticated reasonable creatures just because they were in constant contact with me. Well…

After the hen disaster described elsewhere (HERE) the little stable behind our house became the home of rabbits. We re-enforced the fence so that they wouldn’t dig their way out underneath it and we enjoyed watching them move freely in the protected area. (The “normal” habitat for rabbits is a small cage and I always felt so sorry for them to be in such a narrow prison.) 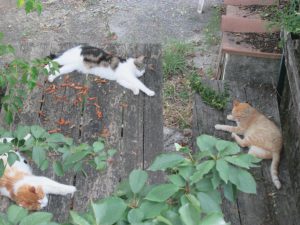 Cats taking a nap during the hot hours of the day

In the hot Italian afternoons, the best thing to do is to take a nap which we did regularly. One day I heard a tiny but intense squeak. I had no idea where it came from, but later in the day, I found out that mamma rabbit seemed to have one less of her sweet little kids. Mhm. Strange. I feared that the hen story would be repeated, but all doors were closed, the dog under control, no way for him to enter the fence or the stable.

The next day during my nap the same noise. Now I jumped up like a rocket and ran out, barefoot (which is not a good idea when you leave the paved ground) and ran towards the stable when Rosenrot passed me with a screaming little rabbit in his mouth. I shouted at him. He stopped for a second as if he was undecided what to do but then went on and ran up the hill. My relentless shouting and screaming probably scared him more than convinced him that he should abandon the little rabbit but I was totally unaware of that. I was in an explosive state of mind, a mixture of fear, care, disappointment, anger and desperation which induced me to follow the cat up the hill to the edge of the wood, always hoping to convince him to let go the little rabbit. Rosenrot several times stopped, look 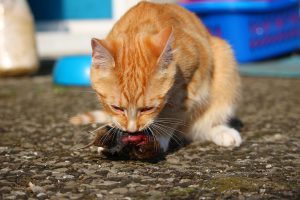 ed back toward me – who furiously and breathless ran up the hill behind him. But he always decided that the little rabbit was good food and that it was not up to me to decide about  what his preferences were.

Then he disappeared in the wood and I realized that I couldn’t follow him down the steep decline with bare feet. The way back to the house was hard. In my overflowing emotions, I hadn’t noticed how much the dry grass and thistles hurt my feet but now, defeated, I noticed that every step hurt like hell. Finally, at home, I sat down and felt completely out of myself. The explosive mixture of emotions were still present in my body but now the mind woke up again and filled me with all sorts of unpleasant thoughts, beginning with “how can this beautiful cat do THAT to me”  to something like “how can I be so stupid to walk up the hill barefoot – you deserve to pay the prize for that”. And there was the overall feeling of defeat and total failure, together with a vague sense that another piece of my illusory paradise was lost. My naive belief in the goodness of nature got a second deep crack and my path towards recognizing the difference between imagination and reality had taken another step.

How do we act in the face of challenge?

Rosenrot, the red cat who liked to eat baby rabbits, has taught me about my lack of emotional management skills. I realized that entering into panic is not a way to handle critical moments and that I would need to learn more about myself and my emotions so as to become more competent in handling them, instead of becoming their victim in moments where presence is needed instead. Many thanks to this cat who dared to do what predatory animals usually do – against my idea and will!

No freedom in prison but safety 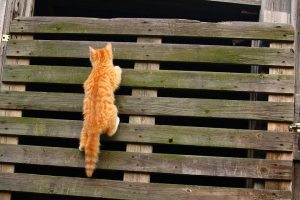 The thief in action

BTW: The next day I found out how he got hold of the rabbits by observing the stable. He just climbed up the fence and probably would have eaten another one if I hadn‘t scared him away in time. From that day on the rabbits had to go back to live in cages which keep them prisoners but also protect them against thieves. Not long after that event and after having seen die a lot of rabbits of incurable diseases I gave up. Killing and eating them was not my favorite either, they are too similar to cats in their fur and really sweet creatures. Thus, after the last baby died which I had tried to raise with a milk bottle after their mother’s death I never had a rabbit again but many many cats who taught me other deep lessons, some of which are already described in this blog.

9 comments on “What cats can teach us about emotions”