A cat sings? Well, you might say, maybe in cartoons. Yes, there are some funny ones, but the other day our cat Rosenmund, also called “Mundl” or simply “Red”, for obvious reasons, sang aloud in a way I have never heard a cat sing.

Actually, every morning he exhibits a short serenade in front of our bedroom door to remind us that he is hungry and wants to come into the house. It is a fancy high pitched miao, undulating up and down and very sweet. So he was already showing some musical talent.

Some days ago we were watching “La Boheme” on medici.tv – an internet music channel which is absolutely awesome and allows you to participate in top quality musical events, live or in replay, and even for free! (If you love classical music or ballet this is THE place to go!)

If you know La Boheme, then you know also that it is quite loud most of the time, with a big orchestra and the singers hardly ever “sotto voce”. They sing in a way which people who don’t appreciate opera would call “shouting”. Well, sometimes they do and force their voices too much, but that’s their own problem. 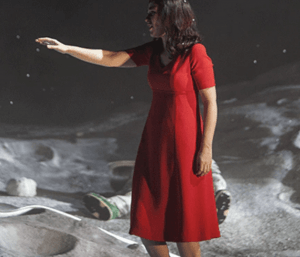 The production of this La Boheme embeds the opera within an outer space environment: you see the earth far away through the windows and the people wearing space suits and, as the exposed text between the acts says, they are running out of oxygen up there. This setting gives a special dramatic sense to the opera which appears to be a dream of Rudolfo about past times on earth. He will die together with Mimi, up somewhere in a place which threatens to become reality in some near future for all us humans – the more we destroy our planet as we are presently doing.

So, where is the singing cat? Here: 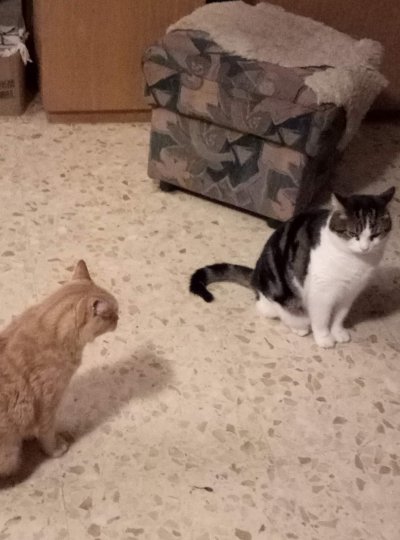 Red and Sunny on the floor in front of the desk

As always, I don’t have my camera at hand in the most important moments, so I have to tell you what happened: My computer sits on my desk reversed to the sitting area of the room for these occasions. In comes “Red”. He sits quietly on the floor for a while, then he jumps up onto my desk which he had never done before as it is the turf of our other cat, Sunny. 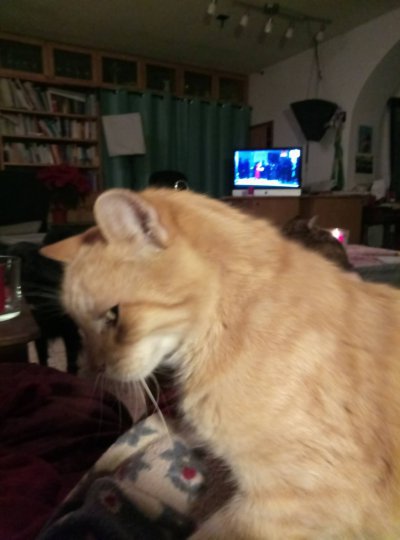 Red after the song, on my lap, a little calmer

Red gets irritated, jumps down again and begins to sing together with the singers on the screen. Sometimes it seems that he gets their pitch, he nervously runs back and forth while emanating sounds which really can’t be taken as simple miaos. Was it painful for him to hear them sing? Did he want to protest? Who knows? Again he jumps up, watches the screen for a while, then goes behind the screen, looking toward us to us from behind, circles around the computer another time and finally, from the back side he jumps on the machine and from there down on the floor again. He seems to have defeated the enemy. 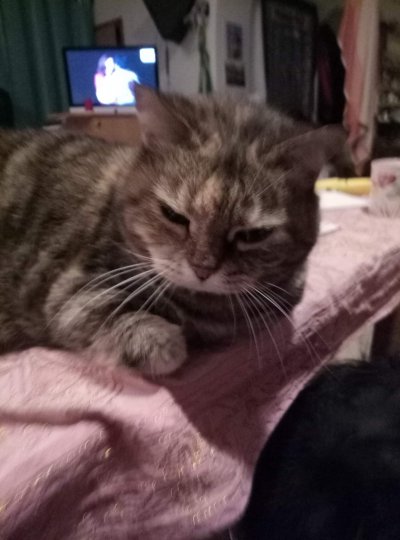 Trixi, Red’s mother, was not interested in Opera and kept calm as usual

After that he calmed down and came to us to sit with us on the sofa and we could watch the opera without further cat-music. At the end we were very taken by what we had seen, by this interesting new interpretation of the old music just by giving it a different and deeply thought through setting. Feeling back I still can sense the effect which watching this particular Boheme had on me which none ever had before.

The unusual behavior of the cat surely added to the mysterious atmosphere and impact which the perfomance of this LA BOHEME had on me!