The Abrupt Ascension of Pete the Cat – by Mark Davenport

The Abrupt Ascension of Pete the Cat

Today I want to tell you about the marvelous ascension event at the very end of Pete the Cat’s remarkably long life.

I “inherited” Pete from my mom when she was no longer able to care for him.  He was 17 at the time and had spent all his life (after early kittenhood) with her.  Living that long with my mother leaves a deep imprint (I know) and Pete was an over protected, not terribly bright, nearly voiceless neutered Tom.

I attempted to care for him in the style to which he had become accustomed – which meant rather low maintenance.  He didn’t ask for much, regular food and water, occasional anti-flea treatments, moderate rubbing, scratching and cuddling (not too much, mind you!) and soft surfaces, please.

He was small and not too well muscled for a Tom, so he preferred staying in the house, which was convenient as I was living in a Florida retirement community that FORBADE all pets – and yes, the residents voted repeatedly to continue this policy during my years there.  So Pete was in addition to his above described qualities, a clandestine cat, never in public view – except to all the other clandestine cat owners on the block! (Don’t ask, don’t tell!) 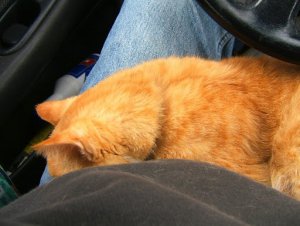 assed together.  If not on the seat next to me, he’d curl up in my lap under the steering wheel as I drove and just sleep, sleep, sleep.  He had settled on those two positions after some exploration of the area under the pedals on our first trip together.

Once ensconced in a relative’s bedroom “up north” he didn’t mind my visiting with family around town all day long, then crawling up onto the bed with me at night.  He just wasn’t a complainer.

So I simply never heard him to complain about his health, so to speak.  He was a very constant and predictable animal and I guess I came to take him for granted.  But he finally did show some problem with urination, not an uncommon complaint for older Toms.  Upon a trip to the vet, I was told he had a kidney problem and they outlined an expensive plan of ongoing treatment that he would need indefinitely.  I reluctantly said no as my sole income was a miserly Social Security check that simply would allow such an expense and we went home.

I did change his diet however, and he appreciated that and it did seem to alleviate his difficulty urinating for some months.  But eventually I could see he was getting worse, not with the difficulty in urinating but in the dark color of his urine and a growing lethargy.  By now he was nearly at his 19th birthday so I simply awaited closure.

It came, gradually-  He had more and more trouble just moving about and eventually resisted moving at all.  I awaited the end.  Then early one morning he managed to crawl from the bathroom almost into my bedroom.  His tongue was dark blue and I was sure this was the end.  So I stretched out on my belly on the floor with him, encircling him in my arms, just holding him as he breathed slowly and heavily and then more weakly and fitfully.  After a few minutes his body indeed did stop breathing.  But before relaxing, a curious incident occurred.

I phrase it that way as I can’t be sure if it actually happened or if I imagined it. Let me describe it by comparison.  On a hot summer day on a highway, there can seem to be “waves” vibrating or rising from the surface of the blacktop in the distance as a kind of mirage.

This is what I felt or saw arise from Pete’s body within a second or two of his last breath.  Though I am not a believer in any traditionally religious sense, I told myself that I had seen his spirit leaving his body!  I cannot forget it.

This spiritual high was however immediately cut short by Pete’s bladder relaxing and he had one long-awaited final pee into my hands as I held him!  I had to laugh in the midst of my tears.