The many things which can go wrong in life – human beings vs. animals 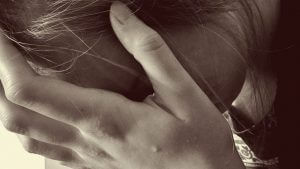 Human beings have the tendency to believe that they are victims of what happens to them. There are those who attribute all the things which can go wrong in their lives to a divine plan (and subsequently get angry with God and end up being Atheists). And then there are those who believe that they are the creators of their own lives and it is their own fault if things go wrong.

Both positions are typical human, typical of beings who have a thinking (or merely believing) mind and therefore it is almost impossible to talk about the many things which can go wrong in life on this level. Maybe it is easier to step down the ladder and watch primates, and most easily our pets, the dogs and cats with whom we have a close relationship and for whose well-being we care.

There is a difference between humans and animals. Luzzy, the cat, as an example

That’s exactly what I intend to do by telling you the story of Luzzy, a 13-year-old beautiful ex-Tomcat whom you certainly cannot blame to have caused his problems himself by the lack of positive thinking or whatever the current slogan might be.

At about age 6, Luzzy had huge problems with his bladder. First I was not aware until he sat nearby, trying hard and then releasing a mini-pi colored red on the floor. As he let me know that he expected me to do something about it, I immediately took him to the vet. He didn’t seem to have bladder stones and so he got a round of antibiotics and for some time he didn’t seem to suffer as much as before when piing. But – you already got the idea – that was not all she wrote. The same problem appeared and returned so often that my brave vet Elisabetta decided to operate to create an artificial exit because the pipe in his little penis was too narrow to allow him to go potty properly and without pain and suffering. 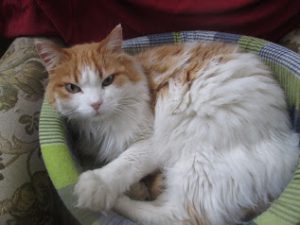 Things went well for a while and Luzzy didn’t mind, obviously, that he was sort of a girl now. On this level, gender identity is really nothing of any importance, to the total contrary of postmodern activists of the human kind. Then came an inflammation in the artificial exit, no wonder, as it is not properly closed towards outside and germs have relatively easy access. 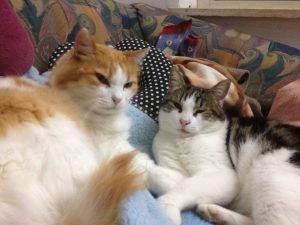 Then, for 5 years, Luzzy had no problems, except the first signs of aging, like a slight stiffness in the joints. He was altogether a happy cat who didn’t bother much about new arrivals like Sunny, the young prince, and Lucky, the 4-month-old black doggie who mixed up the whole pet family in our house. Read about it here) Luzzy just refused their games of challenge and chasing, he kept sitting or lying where he was and took the wind out of their sails. And they stopped to bother him and now they are good friends, especially Luzzy with Sunny.

What we can learn from Luzzy

Maybe we humans could learn something from Luzzy? I admit that I have difficulties to not respond and remain still when I am challenged from whatever and whoever outside – or even by my own inner antagonists. And therefore I really admire Luzzy and his attitude towards life and the world. 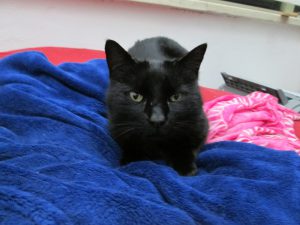 But, be aware, that is not a general statement about animals or even about cats. I had a super neurotic cat, Morle, who reacted with exaggerated irritation to everything which was bothering to her.

Last week I came home from a conference abroad and Luzzy kept hiding on a shelf and a boatload of red stains was on the floor. Blood! And so much! Not like the other times! And the first thing I did was to bring him to the vet. The ultrasound seemed to reveal a strange thing: 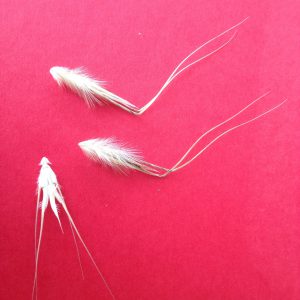 A “forasacchi” (in English something like “perforate a sack”), the nasty seed of a grass, seemed to be in his bladder. These seeds are very frequent in Italy and enter into eyes, ears, and noses of cats and dogs and other animals. They have nasty little barbs which allow them to creep deeper and deeper into the opening they have chosen and conquered, and, on the other hand, resist to any attempt to pull them out backward.

Such a thing normally wouldn’t enter the bladder easily when it has its proper closing. To get it out, even of noses and ears, you need to narcotize the animal if you don’t want it to suffer a lot. There is to say that not long ago nobody would have cared about the pain of an animal or human patients and that we have come some steps further in humanizing our actions at least regarding our pets. Mass animal breeding for our exaggerated meat consumption is still a complete torture for the creatures.

In the case of Luzzy, Dr. Elisabetta Scorzoni managed to enter into the channel with a tiny probe 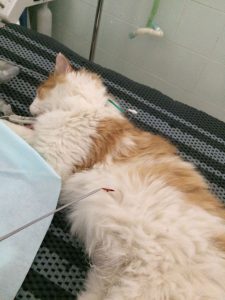 The sleeping beauty: Luzzy after the extraction of the forasacco

and, guided by the ultrasound images. she could get the seed out and so Luzzy didn’t need to undergo surgery. The blood stopped immediately and after three days his reduced and contracted state of suffering ceased and he became normal again. The heavy antibiotic treatment had to go on for several days because this specific seed has the nasty property to induce certain inflamations and resulting illnesses if left alone.

The life lesson for us humans

Coming back to the introduction: Animals have the huge advantage to suffer just as much as is unavoidable and they don’t increase their problems by ways of thinking, or better by the “inner chatter” which so often disrupts the human experience of physical illness. Humans might tell themselves “poor thing”, or “how can God (or whoever) allow that these things happen to me”, or “will I ever be healthy again?”, considerations which make them miserable in addition to the physical pain which often is perceived stronger than if it would be when the person could stay in the pure acceptance of reality without attributing to it all sorts of assumptions and distorted thought processes.

So what was the purpose of telling you this story? I guess it is the life lesson:

We can learn from our animals how to encounter life problems:

Take the problems as they are, find competent people to help you to handle what is bothering you, be patient and take all the necessary care to heal, and come back into normal life as if nothing had happened. Most important: don’t invent stories about the reasons and whose fault it is and who is to blame. Just stick to the facts as they show up and release everything which has gone by.

Easy for our cats and dogs, not easy for ourselves, even when the patient is the animal and not us!

14 comments on “The many things which can go wrong in life – human beings vs. animals”