What happens when your pet family expands?

Animals are like humans, they build groups in which they live together relatively in peace. But what happens when your pet family expands? It is similar when new people come to live in your close family, I suppose.

At the moment I live with 5 cats and one dog. When I write the numbers it might sound as if it was the same writing i.g. 4 cats and 2 dogs. Nada. Like in human families the arrival of somebody new, a baby or grandparents or whoever moving in and becoming part of the family disrupts the previous equilibrium. Previously the family system was clear to everybody and worked smoothly – doesn’t necessarily mean that it worked well and that everybody was happy. It only means that everybody had their role and space in the system, clear and unquestioned. And in the very best pet family things constantly need to be balanced – like in the best human families! 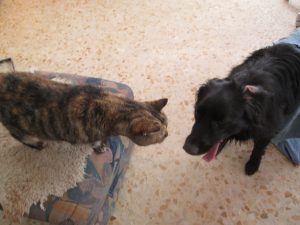 The newly arrived component of the family creates the necessity of re-organisation of the family system. The easiest way is when one of the family members gives birth and introduces the babies to and protects them against the others. Normally they are accepted and given their role pretty easily.

This is different when a foreign animal comes into the family. If this is only you and the cat or dog, this is sort of easy. You learn how to be with this animal and vice versa. There are quite different rules concerning the relationship between the species. If you have already 1 or more cats and a third one arrives, things look quite different.

To illustrate this I’d like to tell you a story about a cat who showed up on my ground while I had about 10 cats of my own. While my own cats hid away in the summer heat and when guests were around – most cats don’t like foreign people invading their space – this cat stayed and stayed. It pleased the guests with his purr and his desire to be stroked (and secretly fed) – and he convinced himself that he was the ONE and ONLY cat in the property. So when my own cats showed up to be fed or to be simply with us, the foreign cat chased them away and assumed the role of the ABSOLUTE BOSS. As much as I tried to interfere and up-level my own cats, the intruder remained a bully and, as I loved my “old” cats, the only solution was to find him a home where he could be the only animal to get the full attention of his humans.

I will give you more examples in time (here and in the blog) of how the pet family is organizing itself and how we humans can interfere to help them sort out their positions.

Tell us your cat story!

In the meantime, if you have a story to tell about your pet family experience, please share it via comments in the blog or via email using the contact form

2 comments on “What happens when your pet family expands?”