Last week I got this email of Karin Bauer, who is a true cat lover and came to rescue a stray cat from a life in a shelter.

Here is what she wrote:

I recently commented on your website about my cat, Freddie, how his early years was spent as a stray/feral, and the badly injured left leg while he was a stray.

Freddie is doing very well now! You can still see remnants of the leg injury, such as he walks with a limp, and the surgical wound still shows. I have to put medicine on it so he doesn’t keep picking at it. I refuse to put one of those “cone collars” on him. I find those dangerous as well as uncomfortable, especially when nobody’s home during the day, I’m afraid about it getting caught on something.

Freddie and the Aquarium

Despite the injury, Freddie is still active and playful! He loves his toys. Some mornings I find toys in my bedroom (he brings them in while I’m sound asleep) such as a toy mouse, or feathery string toy. 🙂

Freddie shows some jealousy when I feed the feral cats. But I can rest assure him that the house is his territory. The feral cats will not come in his house 🙂

I attached a couple of pictures of Freddie. His favorite spot is by the aquariums 🙂

I wanted to learn more about Freddie, and so she wrote back:

I’ve had Freddie since February 2016. I got him a couple of days after my previous cat, Jacob, died at age 17. I had Jacob since he was a kitten (he was never a stray/feral)

Nobody is really sure how long Freddie spent as a stray or feral, or what his exact age was when he was found. The vet estimated he was 3 or 4 years old when he was found. Freddie must have had some contact with people because while a stray,  Freddie let the person who found him pick him up and take him to the Trenton Cat Rescue. So I believe Freddie was never completely feral. Freddie was not neutered when he was found, so that was done while at the cat rescue, along when he had the surgery on his left hind leg. 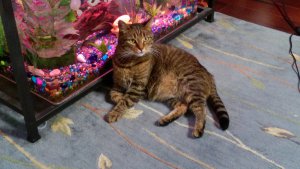 Freddie had the surgery done on his injured left hind leg in February 2015. He was in foster care for a while (I’m not exactly sure how long) then he was at the adoption center at my local PetsMart. The Trenton Cat Rescue bring their cats to local pet shops for adoption.

Freddie fit my criteria of the cat for me. I prefer just having one cat, since I am a single person and I work full-time. Multiple cats would have been too rough for me. Freddie is the type of cat who “goes solo”. I was told he prefers a house without other animals. I don’t have little children either, and Freddie does better without small children. So he became the cat for me 🙂

Because of the leg injury, and he walks with a permanent limp, Freddie cannot climb or jump too well, so he feels vulnerable.  That is why he does better in a house without children or with other animals. But he loves people. When I have guests over, Freddie rubs against their legs and let them pet him. Freddie knows, it was a person who rescued him so he does not view people as a threat.

He greets me when I come home from work, and sleeps next to me on the bed at night. He also follows me around the house (I hear the *tap* *tap* *tap*) on the hardwood floors 🙂

I thank Karin for telling us the story of Freddie. If YOU like it, too, please write us in the comment section your expereince with your cats – and maybe in the future your comments will grow into a story about the cat you love