MOVING WITH CATS to a new home – by Ella Falgren 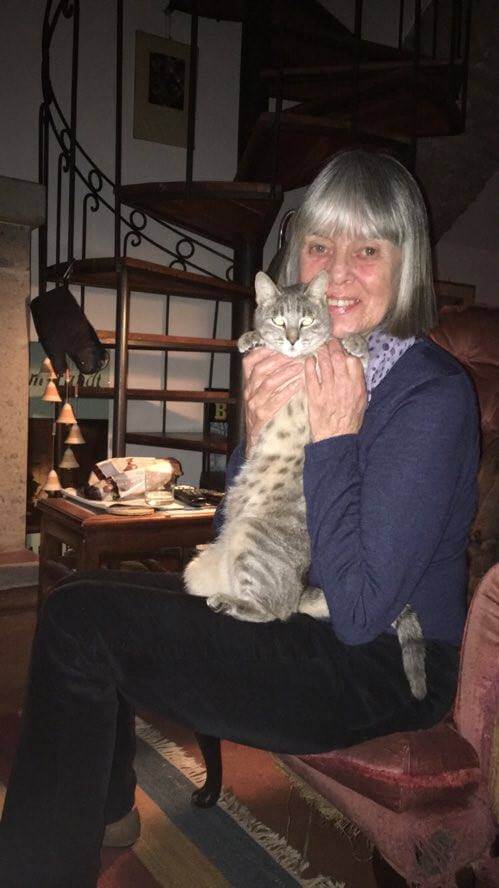 Nine years ago I moved from Devon in England to Umbria in Italy together with my three cats. My vet advised against the move and told me cats were more attached to the area where they lived than to the person looking after them. I found that impossible to believe and as I knew I could certainly not live without them I decided to put them in a large cage at the back of the lorry bringing my stuff, all three with their own passport. The journey was difficult and I felt extremely guilty seeing how much they hated it. During the first part they were numbed by a type of valium the vet had given me. They had access to water, food and a litter tray but were obviously extremely traumatized.  I slept in the back next to them as I did not want to leave them alone during the night and they were clearly begging me to release them from the prison. However, once arrived at our destination, they quickly recovered and slept well and long in a comfortable bed with me!

It did not take them many days to settle in and despite the advise not to let them out to begin with, they were popping in and out of the house normally within days. None of them wondered off but stayed close to the house and seemed to enjoy their new surroundings. One of them, Stina, shortly after became ill and according to the vet she had contracted a u 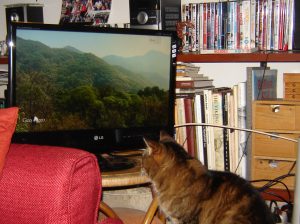 Instead Stina took up bird watching on TV

rine infection which he thought had been brought on by the stress of the journey. All in all they all have had a few very happy years here despite obviously missing hunting rabbits which was their favourite pastime in England. Lizards aren’t quite the same thing and do certainly not provide anywhere near such a good meal. 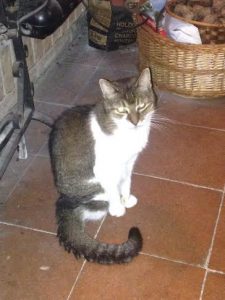 The oldest of the three cats, Greta Garbo, went on to live for 19 years when her kidneys gave in. Stina lived till the age of 17 when she contracted cancer and her sister Alicia is still with me, now an old lady of 18. She is in good health apart from an infected tooth which we keep under control with regular antibiotics shots as she is far too old for an operation. 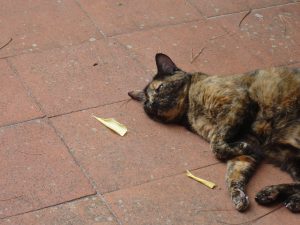 When Stina became ill a stray cat arrived at my door, undernourished and rather frightened. After a few months of feeding and approaching her  slowly, she has now become completely settled and is a wonderful and very attractive cat, called Tosca. In the meanwhile there have been two brief intervals with other cats that arrived and then disappeared. Wasta and Mezzanotte. It is always hard when an animal disappears without trace as you do not know what happened to them. You imagine the worst whilst they may well be sitting on some old lady’s lap purring away. You just want to know one way or the other.

Finally a cat that goes with my hair! XOXO!

This article was written by Ella Falgren for our blog.