What causes blindness in cats? 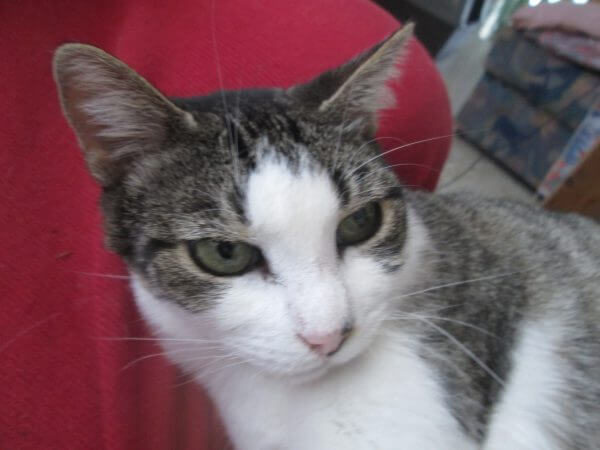 When Kittie joined our pet family we asked ourselves: what causes blindness in cats? She hasn’t been blind before, during the two years she came to visit us as a stray cat! Or was she and we haven’t noticed? That seems really unlikely to me.

When she came clandestine to the food place, she hid in the bushes and figured out when the others wouldn’t be around, the dog out of sight. Then she would run over to the covered food shelves with 6 food bowls, she would eat quickly and run away as fast as she could, before anyone would notice her to chase her away. 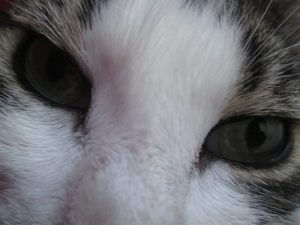 We often watched her coming and going. She seemed to get enough food to survive, but she always remained small and slim. She was a “little kitty”. Once we witnessed the dog running after her and chasing her behind the railing – from where she fell down about 3m deep. After some days we noticed she had a thick thigh and a scar. But she was still stray, she wouldn’t allow us to come near her.

Does this mean, then, that she was not yet blind? I believe so. But what caused the blindness? What normally causes blindness in cats?

When we noticed her blindness and took her into our care, we went to see our vet. Elisabetta confirmed her blindness, but she couldn’t find a physical reason for it. The eyes seemed normal. She suggested that the cat had endured a shock, that something in her brain has got muddled up which caused the disability. 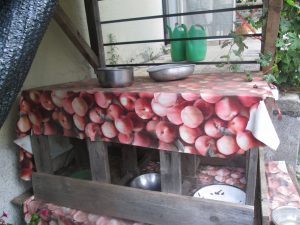 The outdoor feeding shelf for the cat family

Remembering the time when we saw her fall down from the terrace – and who knows how often and violently it has happened again, this seemed to me a plausible explanation: a shock which causes blindness.

I had read in the past how psychology influences the functioning of human organs, so why not in cats? Animals are emotional creatures like humans, they know fear and panic as well as we do. Sudden blindness is possible also for humans in extreme situations – or the well known grey hair effect over night in consequence of  a highly emotional disruptive experience.

There are for sure many more possible reasons which cause blindness in cats and we will talk about it further. I would be happy if you could consider, after reading my post, that there are not only strictly physical reasons for illnesses in animals, like bleeding wounds and hurts, but they can also appear by emotional upheaval.

I will tell you other stories in future post where some cat of mine literally died by broken heart.

5 comments on “What causes blindness in cats?”