Never Do This to Your Cat!

Never do this to your cat!

It is still difficult for me to write about it, but it is important that you know to never do this to your cat! What did you do? – you will ask me. Here is the story of Tommy.

Tommy came to me as a tiny kitten many years ago. I needed to protect him against the adult cats and so I took him inside the house with me while all others were used to live outside. 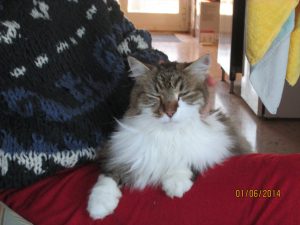 Tommy in my lap

Many wonderful stories about our relationship I could tell you now, but today I want to speak about what I have learned about my actions – which led to a very sad outcome.

The master of the bedroom

Tommy was my favorite cat, we had a deep relationship and it was normal that he slept with me, curled over my head or sitting on the blanket on my belly. For many years he was the absolute king in the house – until my now husband Mark arrived. Slowly, one cat after the other was admitted inside the house, too. So far no big problem, but you could notice a certain jealousy in Tommy. 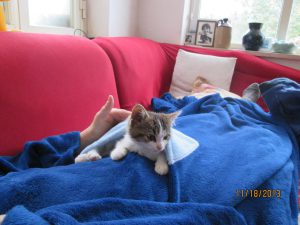 One day Mark heard a little kitten wine behind a trash container – and we decided to bring it home. How to introduce it and defend it against the big ones? We wanted to protect it and decided to bring it with us into the bedroom, under the cover, while Tommy, as usual, lay on top of the blanket. Then it happened: Tommy discovered the kitten – and he was completely p…. off.

What we thought to be a wise move turned out for him as a betrayal. From that day on he kept a certain distance, our relationship was hurt, he was hurt and wouldn’t understand that we wanted another creature beside him. No compassion for lonely kittens in the animal world. 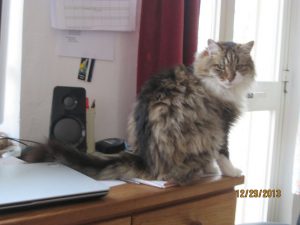 Tommy on the desk

After 6 months or so the young vigorous cat and the 12 year old Tommy seemed to have found a way of co-existing. Tommy avoided Sunny, ignored his invites for playing and kept his distance from us. While before, every evening, he would have slept on my lap, now he was nearby, on the table or the back of the sofa, but not any more in confidence and connection with me. He held the grudge of having felt betrayed.

The arrival of a puppy, young and energetic and enjoying to chace cats, definitely was too much for Tommy, he withdrew more and more, and he became demanding and restless. I noticed it, but I didn’t know what to do. I thought the animals would get used to each other in time. I didn’t really imagine how much I could have hurt the feelings of my beloved Tommy.

The end of the story: 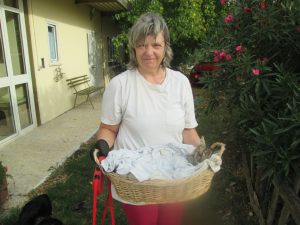 One day Tommy didn’t come back into the house in the evening. We found him the next day, bent in himself, trembling and really not well. I took him to the vet. He had a problem with the thyroid and all my efforts to make him eat drugs were useless. He died after 2 weeks – of broken heart, as I know now.

Thyroid problems are connected with the psyche and deep hurts can lead to this sort of illness in people – and, as I understand now, also in animals. So never do this to YOUR animals, especially if you have a deep relationship with them!

Looking backward I could have introduced the newcomers to Tommy in a careful way, I could have taken care for him, especially, instead of being seduced by the playfulness of the young newcomers who pushed Tommy away from his supremacy in the house. It is like with children: when the second one arrives you need to take special care of the first one and make sure that it isn’t neglected.

4 comments on “Never Do This to Your Cat!”