Every day the same surprise – the vengeance of Trixi

Did you ever expect vengeance from your cat for having done something to her? Yes, we know that cats scratch when you touch them the wrong way or if someone is even  mean to them. This is normal, an immediate reaction. But vengeance? And every day? Why should they do that? 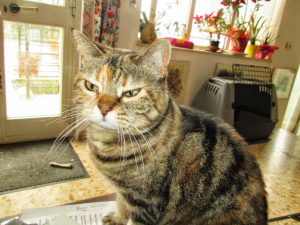 Well, it actually happens with Trixi, my senior cat and every day she is offering me the same surprise. What?

First I smell it: She did it again? No! we had talked about it, we had made a deal, she wouldn’t do it again – and if she did she would do it in a reasonable place! The smell persists and leads me down the steps. I don’t see anything – yet. I really have to go to the bottom of the steps. I see the box, yes – and now, next to the litter box the little brown balls, grouped together under the far end of the staircase….

Down on your knees and stretch out to get them! Ha! Done!

Trixi is on top of the stairs, watching me. I show her what I have gathered, make her smell it and she just turns around, holds her head upright as if she said: “ah, well, that is for you! Others bring mice, I give you this and going on your knees keeps you young”.

So why do I call her behavior vengeance?

This is subtle cat psychology and I am an apprentice in the matter for more than 25 years. Cats are very sweet companions in many ways – and they are, at the same time, creatures with their own will and their own ideas about how things should go and what is right or wrong. You can dominate a dog, you can never dominate a cat. You might be very, very close, but the cat has the last word, so to speak. 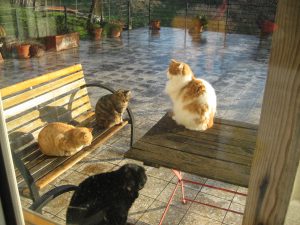 Trixi and her 3 sons – her close family

Trixi has been a very proud and loving mother to her 5 kids and unlike other cat mothers she maintained a good relationship with all of them who remained with us, 3 in number. She took care for them, made sure they had enough to eat and she herself was always last to eat the rests. New kittens arrived in the pet family in an organic way, by birth in the house of already existing family members.

Then came the day when the young kitten Sunnyboy entered our house. We had found him near a dustbin and taken home. All members of the cat family hissed at the kitten and got somehow respected, while the soft heart of Trixi emanated the invitation to Sunny to target her for his innocent ways of exploring the world. Trixi was already 11, not really young anymore and 10 years since she had her own kittens. She certainly was not pleased by being invited to play all the time, she sometimes tried to flee, but at the end she gave in and adopted the kid and educated him as if he was her son. 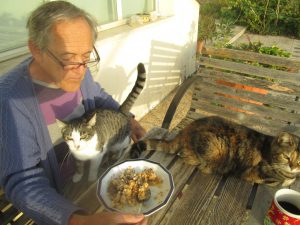 Trixi allows the blind Kittie to occupy the first row

There was a time then when Trixi did her poo outside the box, but after some months – and several telepathic conversations – she agreed to use the box again and things settled all together in the pet family. But then,  some weeks ago, Oli, the stray cat, was introduced in the house, a huge bother for all old family members. He stayed only for 3 weeks or so and then needed to be put down (see his story in previous posts). But the family atmosphere was disturbed. And Trixi expressed her protest against someone else to cope with by, again, ignoring the litter box. 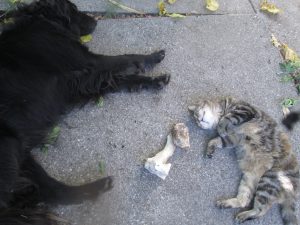 Lucky and Trixi don’t fight for the bone

No telepathic communication could help so far. She seems to have drawn back, lost trust in us and is less willing to listen to me. And when I show her the gift I have collected under the staircase she sort of sniffs, makes a certain face and walks away as if she said: “That’s what you get when you confront me again and again with all these (animal)  people” – and she gives a short look over to the 2 year old dog Lucky who she had had to educate as well, having been the only Mom in duty.

I feel the vengeance in Trixi’s behavior and the need for being acknowledged and respected more – not much different from human Moms who do all the work, all the others come first and they remain sort of invisible. Fortunately, those will find some other form of surprise to their loved ones…….