Princess Arlechina or how grandmothers can be useful sometimes

Arlechina means “Harlequin” in English, and you can imagine how she looked like: all patchwork, white, black, and red-orange spots in no particular order all over her body. She looked somehow funny. As if she knew that, she made herself up as something very special. She sat in her little basket in a certain upright posture which gave her the flair of a princess. Hence the name Princess Arlechina. 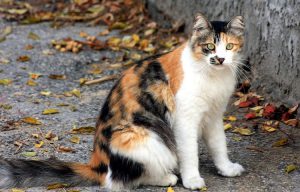 Yes, you have guessed right, Arlechina was a cat, one of the progenies of SnowWhite, the grandma cat, we have already talked about before. When she was a kitten she played with her siblings, yes, but always somehow detached as if she lived in a different world. She didn’t seem to have any illness or handicap, it was just her way of being. If she had been human you would have labeled her as a mystic or a dreamer.

The Burden of Adult Life

But Princess Arlechina was not human, she was a cat. And as it happens to all kittens, sooner or later they grow up and the burden of adult life comes over them. Male cats cannot help but have to go for female cats, and female cats come into heat and suffer a lot – until they have found the right tomcat to satisfy their desire. And what comes next, we all know.

I wonder if you have ever watched a female cat longing to be fertilized? It is heartbreaking, she is rolling around, her body yearning for something which she doesn’t even know – at least when it happens the first time. It lasts for days and days. Male cats arrive but the female chooses who to go with – and maybe she is not really ready yet for the first tomcat who arrives? Nature is strange in that, First, the sufferance needs to be lived through and then comes the liberation. The pitiful behavior of the cat stops almost immediately after fecundation and everything seems back to normal.

What about the usefulness of grandmothers? 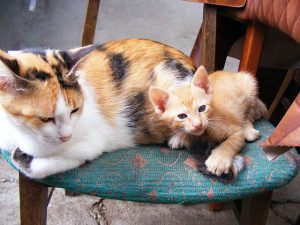 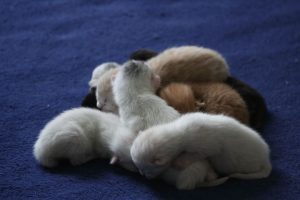 A breed of kittens

Well, after due time Arlechina had a handful small little sausages in her basket who eagerly searched for her tits. It is amazing how these blind little creatures find their way to the source of food! Arlechina didn’t seem to have a proper maternal instinct. She sat upright in her basket, the eternal princess, and didn’t bother much about this meandering mass at her feet. The little ones tried their best, they were very hungry, but with little or no success.

The miracle of Mother Nature

Then a miracle happened: Grandma SnowWhite – who usually was not very friendly to her kind – entered the nest, lay down and offered her belly to the hungry crowd. It had been almost a year when she herself had last bred. So she didn’t have any hormonal activation for any milk to be produced in her tits – and actually, she didn’t have any, and the kittens kept whining and searching. They must have found a drop of milk every now and then stolen from their own mother but the state of emergency remained red for several days, until  –

Until Grandma SnowWhite produced milk herself and nurtured the whole breed while her granddaughter Princess Arlechina sat upright nearby, not interested in this earthly business and allowing her Grandmother to take over what would have been her own motherly duties. 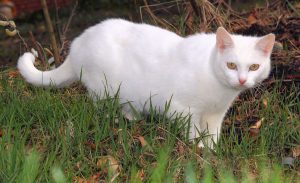 The end of the story

The kittens grew up well fed and cared for by the legendary SnowWhite. Princess Arlechina herself didn’t last long. When the kittens were grown up she just disappeared. This happens normally with tomcats in their sexual urge. Female cats normally stay around and find a way to co-exist with other females. In those times there were hunters around here who spread poison. I had lost 3 dogs this way, maybe Arlechina was the victim of these unholy habits, too.

Are Females really programmed to be a good mother? 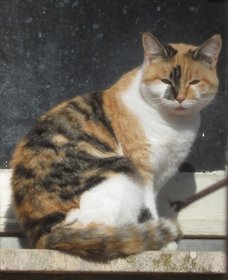 Maybe Arlechina was just not made for this world? Maybe she was a “transcendental cat” and followed her destiny in very young years. Who knows. What I know is that she was very unusual in her ways of being and also in her appearance which, after all, was beautiful, at least in my eyes

PS: Arlechina was here about 25 years ago. I didn’t take photographs at that time, I have only very few paper prints of some of the cats I am writing about. So the photos you see in this blog are not representing the individual cat. I try to find photos which can transfer best what is in my memory of their character and expression.