Prince, the orange Tomcat who mastered the trap.

Why would you use traps?

In the area where I live it is illegal to use traps for catching wild animals, but it is a tradition that people do it, anyway. They construct traps of bicycle wire which they insert into holes in fences, hoping that foxes or porcopines get caught there. Well, and often other animals end up there, too, like cats and small dogs.

Yes, you already get it. My cats ended up there, too. But mostly they just disappeared and never came back. If it was for a trap of for poison or for some other reason, you never knew. I often went through the countryside calling missing pets, searching for them for days, and hardly ever did I find one. As laying traps is illegal, nobody would tell you that they have laid out some and where. So searching for missing animals by checking traps was not an option.

The story of Prince, the orange Tomcat 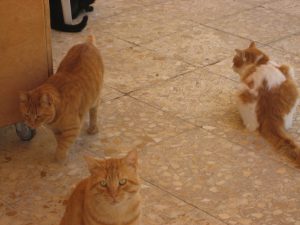 Prince with son and daughter

I haven’t talked yet about Prince, a well-grown Tomcat who – seen from now – would have preferred to be neutered instead of carrying the burden of being a functioning male. He always seemed reluctant to defend his females, which after all was his job. He did it, yes, but you could tell he would have preferred to lie behind the furnace. He was with me in a time when I didn’t neuter cats, which is a normal thing now – and I learned my lesson.

As I said, Prince was a real Tomcat and so it happened that he would leave home and not come back for weeks. I got used to the fact that, one day, he would come back, emaciated and hyper hungry. Then he would stay at home for a while until he was round and healthy again, ready to go out to follow the biological urge to procreate his species. 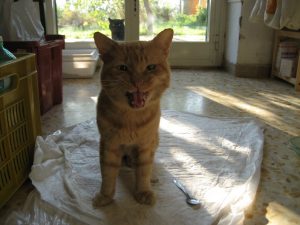 Once he seemed to be away really long, 3 months or more, and I already feared he wouldn’t come back this time. But one day he stood in front of the door, thin as a skeleton. His head, large as tomcat heads are, didn’t fit to his tiny small body. He looked really weird – and he assaulted the food bowl and ate and ate and ate.

Then came the shock

Later he came up to sit near me on the sofa and I stroked him and was happy to see him again, while he purred and purred and kept staying near me. He really didn’t look great, but I didn’t suspect anything – until he went again into the kitchen, and when he passed the door I heard “click, clack”, and whenever he passed by a piece of furniture: “click clack”.

And then I saw something white in contrast to his orange-red fur. What was THAT?. Coming near I almost fainted: a white bone stuck out of one of his hind legs! How awful! I figured that he must have been caught in a trap and waited for weeks until his leg died where it was caught. And so he was able to pull it out of the trap, leaving the lower part of the leg right there, sacrificed for his survival.

Can you imagine how shocked I was? And my heart overflowed with compassion and sadness for this poor guy who had almost starved himself to death, waiting for the moment when he could split his leg and pull himself out of the trap. 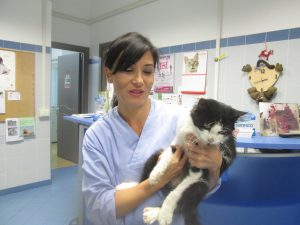 Needless to say that I took him immediately to the vet, Dr. Scorzoni. (You can see her in several recent videos in this blog, for instance HERE), but in Prince’s time, I didn’t have a video camera yet. Dr. Scorzoni did a good job in cutting the bone and covering it with skin from the remaining thigh. She also cured him of the many infections he obviously had attracted while lying immobile somewhere in the countryside, caught in the trap and unable to move or to feed himself. It is a miracle that he had survived, exposed to the weather and the dangers of being attacked by other creatures. 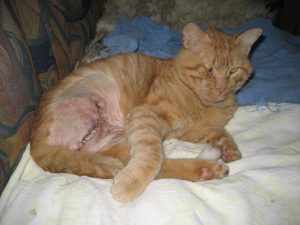 Prince after surgery – the right hind leg is gone

It took some weeks until Prince healed and looked like a proper cat again. From then on he stayed home. I actually, finally, neutered him so that the biological drive wouldn’t take him out into new adventures again. Prince learned to walk on 3 legs perfectly, you hardly noticed it. 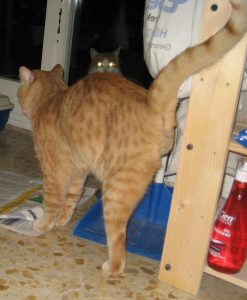 He used the one hindleg as a tripod, placing it right in the middle of his front legs. He never lost balance and he was even able to jump on the table with the force of his single hind leg. It was really amazing. The only problem he had was fleeing when dogs were chasing him. We had to rescue him every now and then even though he was unexpectedly quick in his movements, but not quick enough to avoid the unpleasant encounter with a dog.

The retired cat – in peace

Prince lived with only 3 legs for about 5 more years, if I remember right. He finally was in peace with himself, he didn’t have to play the male game anymore and he enjoyed curling himself up on a soft cushion on a chair that stood under the terrace roof. And it was there where I found him one day, happily sleeping, a little smile on his face. He was dreaming the eternal dream of a happy cat. We buried him, side by side with the 5 white cats – you have already met Grandma Snow White – and a few others who had gone that way before him.

2 comments on “Prince, the orange Tomcat who mastered the trap.”