Why cats live a good life when you neuter them 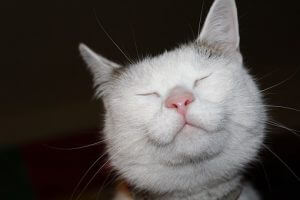 Whan you decide to have a cat then, sooner or later, the question of neutering comes up. I will give you several examples which can answer the question, Why cats live a good life when you neuter them.

To give you a little background of my experience: When I came to live in the open country and had my first cats, I was convinced that the very best for animals would be to allow them to live their natural life, without me interfering with their biological settings and their self-chosen ways of living.

This went fine as long as the cats were living in a certain distance, like stray cats, just coming for being fed. But as soon as a relationship grew between them and myself the situation changed drastically. I wanted to care for them, make sure they are well and happy – and I also wanted them to like me and stay with me and be stroked. I like to touch the fur of cats and to hear them purr, I enjoy deeply the relationship I could establish with everyone of the cats who accompanied my life.

So, do cats have a better life when they are neutered? YES, the definitely do.

The first story today is about Paulchen. One day a visitor brought in a cat in a box. He said it was run over by a car, he had picked it up, but he couldn’t really take care of it. Sure, I would do that! Whose heart wouldn’t open when you see a creature suffering. The cat didn’t have any recognizable wounds, but one eye was 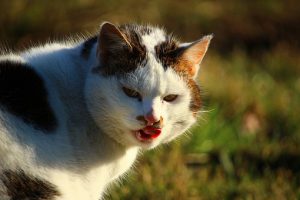 strange  – and actually, I thought he would die soon, he didn’t give much sign of vitality.

Paulchen obviously was eating up some of these 7 lives. He couldn’t eat alone, I gave him egg yolk and milk directly in the mouth, and the spilled sticky liquid on his fur didn’t really improve his appearance.

After a few days he became alive and not long after he was restored and vigorous. Except the blind eye, he seemed normal – and he was immensely grateful to me, he always came to me, stroked my legs, or my face when he was on my lap. He was a really loving and sweet creature.

In time I realized that something was wrong with his hearing. When I called him he wasn’t sure where to go to meet me, sometimes he walked in the opposite direction. So I understood that yes, he heard me, but his ears had lost their ability to localize the direction of the sound. I was not bothered much about it, as Paulchen was always around me and around the house, giving me much delight and satisfaction by his lovely behavior.

What I wasn’t aware of:

One day I couldn’t find Paulchen. I called him, searched him everywhere. No Paulchen. He didn’t come home anymore and the beautiful relationship ended by a terrible mistake I made without having been aware of: Paulchen had become a healthy young Tom Cat – and as such he, probably, had gone out to find some female. But he had no possibility of orientation with his ear problems – and so he couldn’t find the way back home what is never a problem for fully able cats. And probably he died soon because of this inability which would have hindered him to defend himself against dangers in an unknown world.

Neutering would have saved Paulchen’s life

Had I thought of neutering Paulchen in time, that means before the masculine impulses have driven him away from home, he would have lived with me in his beautiful loving way for many many years. By NOT neutering him I had condemned him to a very premature death and our live together to a sad ending.

More about the advantage of neutering cats, female and male alike, will come soon: