Why would you be in fear of cats, dogs or other animals?

Fear is not a bad thing. It has helped humanity to survive. And if you meet a rattlesnake or a lion, to be in fear probably would be an adequate response, especially the automatic fear reaction: freeze, flee or fight, which is imprinted in humans as well as in most animals. The question I am asking you today is: why would you be in fear of cats, of a mouse,  a bird or a dog, or other animals which have a long history of co-existence in the houses of us humans?

Why cats and dogs can be dangerous.

I believe that there are dangerous dogs, even dangerous cats, but that they became dangerous to humans because of their bad experience with the people who had the power over them, who mistreated them and who taught them to be dangerous. By themselves cats are just cats and dogs are dogs, both with their particular needs and expressions, and when you respect them they will respect you, too.

The fear of mice 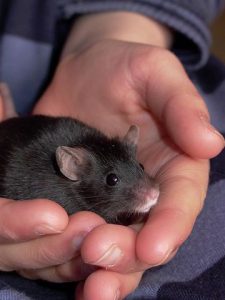 Mice are not dangerous, but actually quite cute little animals

Before I tell you how I overcame my fear of cats I just want to cancel mice from the list. Especially women have the tendency to scream as soon as they see a little mouse and they climb up on furniture to stay safe from their atrocious attack – I am joking! I don’t know who in our history has told us to behave this way, like a helpless victim of tiny little beings which actually don’t have any real power over us. A mosquito can harm us much more than a mouse, but a mouse seems to be more frightening. I have my own theory about the origins of this fear. It would also include high heels and narrow skirts which make it impossible to run away in moments of fear. Well, you can flee a mouse, but probably not a rapist. So maybe this is a deviation of our attention from the real dangerous things to a harmless substitute?

You don’t fear what you know!

Fear of the unknown is a normal human condition. As soon as we get familiar with whatever comes into our awareness we lose the fear, unless we have come to the conclusion that it is dangerous, in reality. In that case we would be very careful about it. Therefore, when you grow up in contact with animals you most likely know how to handle them and you are not caught in fear. You might not like their presence as an adult and chose to live without them, but as far as I know this is rarely the case – unless you were in contact with an animal spoilt by the neurotic behavior of their masters which might have caused you trouble and deep fear in early years. 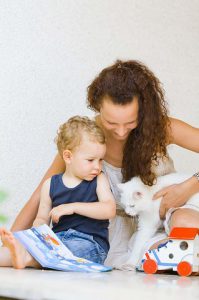 Growing up with cats – no fear of cats as an adult!

If you haven’t had the pleasure to be with animals in your childhood you just don’t know anything about them. Maybe you have read a book, but this doesn’t substitute the experience in real life. So you might fear cats because people have told you that they are false and that they would scratch you and similar bad stories. That certainly was my condition when I was in my early twenties – and I kept always a certain distance from cats.

How I learnt to let go of my fear of cats 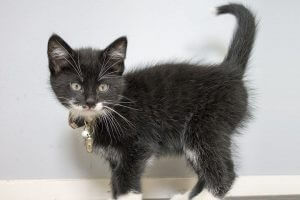 Who can resist at a similar creature?

One of my friends was a passionate cat lover and once I was invited to stay in her house for a week or two. I certainly couldn’t avoid meeting cats there but I didn’t dare to touch them, I had too much fear to get hurt by their claws. But there was this tiny little black ball, a kitten of two or three months, and I couldn’t help to find her cute, sweet and lovely. My heart opened to this little creature and then, naturally, I wanted to touch it. It felt so nice and soft, the fresh fur of a young kitten, and she liked the touch. So I became bolder and even dared to be touched myself by her claws – and, oh miracle, they were sharp, yes, but I found out that nothing happened when I didn’t pull my hand away under her nails. Just the feeling of being touched by a needle, but no scratches on my skin.

What can such an experience teach us?

If you don’t fall into panic when a cat touches you, and if you don’t pull back, nothing serious will happen to you as long as the cat is not aroused. And you can learn to recognize the mood of the cat and decide in every moment if you stretch out your hand towards it or not. I wouldn’t recommend to touch an aroused cat, although, with a thorough cat-experience you still don’t get hurt necessarily.

It depends on YOU and how you interact with the cat. If a cat scratches you then you can be sure that you have tried to do something to her which you better shouldn’t have. You might have forced your will on her, wanted her to do what you asked her to do. Well, cats are liberal beings, they don’t want to be forced and they defend their freedom and in this they are quite different from dogs who like dominance. 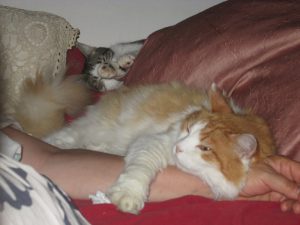 They love to lie on you – no need for fear of cats!

Cats don’t want to hurt you, especially if you have a close relationship, but their ability in controlling their drive to freedom is quite limited. Whoever has tried to put their cat into a transport cage probably knows what I am talking about – and those are the only moments where we experienced cat owners risk to be hurt and we better wear gloves and protect our arms, maybe also our faces in order to get the cat into what she perceives as a prison.

There are differences in animals, as they are in humans.

Certainly, cats, like humans, have different temperaments. There are those with which you can do almost everything without problems and others who are sort of schizophrenic and get wild when you need to get them under control. I had a cat named “Rönly” – which came from “Marönchen” a hybrid word of Italian “marone” = brown and the German word-ending “chen” which expresses “small and sweet”. How I got him into a transport box to bring him to the vet for a life saving surgery will be enough for an extra story.

Overcome your fear of cats – it is highly rewarding!

The purpose of today’s post was the encouragement to overcome your fears. Starting with domestic animals is surely a good thing. When you have discovered how much their behavior depends on your own emotions, on your own ways of relating to the animal, 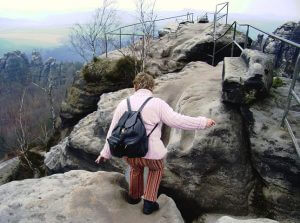 you can free yourself from useless and unjustified fears – and you soon will be wondering about those people who get “hysteric” in the face of those animals which you now know as peaceful and easily understandable and manageable.

And when you have learnt to listen to your animals and understand their emotional state you might begin to pay more attention to your fellow human beings and understand better what they are feeling and what they might be up to. Let your cat – or your dog or both – be your teacher!

2 comments on “Why would you be in fear of cats, dogs or other animals?”