How a handicap can create a tyrant

How a handicap can create a tyrant –
Kittie’s rise from an outcast to the boss.

When we noticed that the cat which came to eat in our place was blind we allowed her to become an indoor cat. We had the best intentions – and no idea what would happen in the pet family and to us… 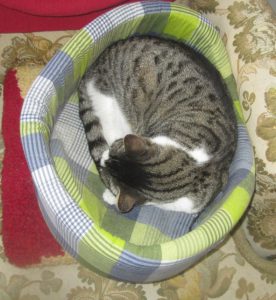 Kittie in her basket

Kittie, as we named her, had been around for a year or two, sneaking her way to the feeding place and trying to avoid our resident cats, as well as the dog. (See a previous post here) They didn’t behave friendly to her at all. They chased her away, sometimes so violently that she fell from the roof. We witnessed a swollen leg after one of those episodes, but it seemed to have healed well, so there was no real reason to interfere.

But then, noticing that she banged her head against random objects in her way, we felt responsibility and compassion and from that day on she slept inside the house. First, we shut her in the transport basket over night in order to protect her from the others who were not pleased at all to see her invade their habitual space. She complained a lot and it was difficult for us to sleep – until we decided to allow her to be free at night. She behaved well in many ways, she used her own litter box from the first day, and despite her lack of sight, she quickly found her way around the house (see previous posts here and here). And she kept her submissive behavior for quite a while.

I had already had some experience with handicapped cats, like with SnowWhite, the deaf cat (see her life story here and here and other stories where she appears as an important player: here and here and here, and here). And therefore I knew that they have the tendency to impose their will on others, us humans included. That’s why I insisted that Kittie not come into our bedroom where we enjoyed the regular presence of Sunny, placing himself in his delicious manner between us. Also, Trixi slept with us often, mostly lying on my chest or lap which made it sometimes difficult to sleep well. But it was a real delight and honor that our cats enjoyed our company singing us a night song of purrs.

How to set boundaries? What can we do?

We placed a box as a barrier in the door in ways that our cats could jump over, but which Kittie would bang against and not enter. However, we didn’t pay that bill with Kittie. She got blocked for a while but was pretty sure that there was something interesting in our bedroom. It didn’t take long until she discovered how to overcome the obstacle and in she was. First, on the floor – the other cats observed her suspiciously. Then she discovered the bed and how she could climb up – and our bedfellows Sunny and Trixi jumped down disgustedly. I knew now that something had to be done to defend the rights of the resident cats and I tried again with closing kittie away over night.

Now we had the choice: either a complaining and wrestling Kittie for most of the night, with the other family members disturbed by the noise and the angry atmosphere, or allowing Kittie to stay free and come and see us in the bedroom. One thing worse than the other, and so we decided for our own sleep without cat noises – and Kittie was free again and resumed her victory march into the bedroom. After some time I noticed that Sunny stayed away from the room and Trixi, if she came, would stay at the far end of the bed while Kittie, purring, slept right next to Mark or on top of him.

How Kittie rose up to the family tyrant 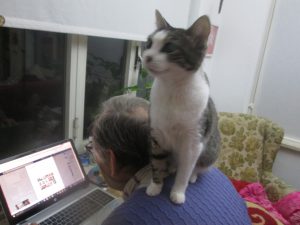 Kittie felt – and still feels – that I am angry with her because she has driven away my preferred cats and somehow destroyed my perfect relationship with them. That’s why she holds tight to Mark, at night and during the day. She sits on his laptop or his shoulder and enjoys her life in darkness. Sunny still lies next to my computer keyboard and Trixi sits on my knees during meditation and on my chest during the afternoon nap – but only if I take care to keep Kittie far away on the other side of the coach.

Thus it happened last winter that Kittie rose up to a super dominant being in our family. Although she doesn’t see, she notices often when another cat is near her and, according to her moods, she avoids them or attacks them! They often respond with chasing her around and then, in panic, she will bang her head against the furniture. We shout at the other cats – but aren’t they right in complaining about someone who pretends that everything is about her? She claims all the chairs and mats which the other cats or the dog were occupying before. Kittie goes everywhere. She uses all 3 litter boxes – while the other cats respect the one which was put out especially for her. No, she is the first one to deposit her pee in the freshly cleaned litter box of the others, expressing that she is the queen in the house. Trixi responds to the supremacy of Kittie by pooping outside the box, neatly, which I interpret as a protest. All attempts to show Trixi where to put it instead are useless – and she is otherwise a very sweet and agreeable cat! 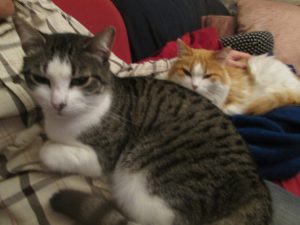 Kittie and Luzzy on Mark

How can we help to create peace and harmony in the family?

What to do? We have compassion for creatures who have difficulties and we are willing to help them. But how far should we go? This is valid for our animals or friends or family members. What to do when they pay us back with improper behavior and with expectations to dominate by all means, even without realizing it? How would YOU create harmony and peace in the family?

I tried with setting clear boundaries on behalf of the other cats who were somehow reluctant to do it themselves. I push back Kittie when she is about to prevail and I also defend her when others are too rough with her. I bought an expensive product which actually helped a lot to calm down the aggression in the cat family – I notice heavy fighting when we run out of it and relative peace as soon as we open a new pack. This made the life together tolerable and relatively calm, but the power order definitely has shifted since Kittie lives in the house and my relationship with my “old” cats has changed a lot. They seem to trust me less, they are distant more often than before, they seem to be unhappy with the atmosphere created by someone they don’t know how to handle – as Kittie behaves quite a bit differently than a normal cat. So they try to avoid the encounters – and with it, they also keep distant from us, especially when Kittie is not far off.

Too bad. I am really sad about it, but how can we teach cats to get along with each other and to be respectful and tolerant of a handicapped one? Why would I expect them to behave that way when not even people succeed properly in the same task – with all the rationality and education they have?

The Product I used to Create peace in the Cat Family