Don’t worry, that’s me!” – the Story of Sunnyboy

This is the story of Sunnyboy, the foundling who conquered everyone’s hearts – and caused the death of my most beloved cat Tommy (read the tragic story of Tommy here).

The newcomer claims his place

One November morning we were on the way home from our weekly Pilates lesson when Mark stopped and asked me: “do you hear that?” There was a whining, a sad little voice of a cat in distress. Where did it come from? Behind the fence, under the trash container, we saw a tiny little kitten, alone and seemingly very hungry. Nobody around, it certainly didn’t belong to the mill where the trash was located. 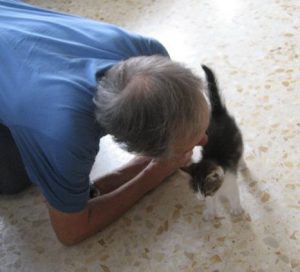 Sunnyboy and Mark – a love at first sight

So we wouldn’t take it away from anyone if we took it home? Mark was already behind the fence and grasped the little fuzzy thing, held it in his hands and gave it over to me, over the fence and in only 2 minutes we had a new family member: Sunnyboy.

He was the expression of his name, sweet, energetic, like sunshine in the cuteness of his very young age. Then, at home, we had the difficult task to defend him against the older cats who were not really very much pleased about the foundling. A disturbance in their tribe, a challenge to their position, a threat to the established hierarchy. Nobody wanted to play with him. The kid was annoying and they responded to him with hissing and slaps. But Sunnyboy wasn’t discouraged at all. He hid for some time and then came out again to try to find someone to play with.
Taking care of the situation 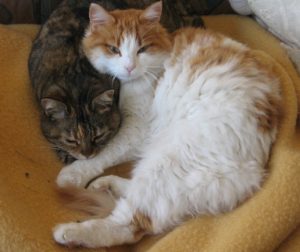 Trixi, the grandma, finally took on the task to teach him manners. With all the patience of an experienced mother – you see her and her “real” son Luzzy on the photo) she met his attacks, fought back in the right measure and made sure that he learned to respect certain limits. It was really interesting and often amusing to watch her education sessions – and after a while her tiredness of being in charge of him and his behavior. 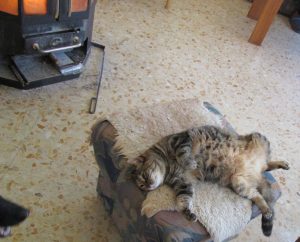 Trixi near the fire

She often fled into the garden until her desire for the warm furnace convinced her to come back and face the nuisance again. 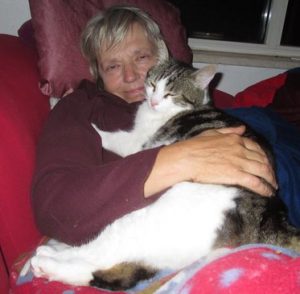 In our attempt to protect the newcomer we exaggerated and didn’t take care enough of the older members in the family. As it happens often: the new babies get all the attention, the older children are expected to accept their loss of attention and be happy with it. Well, as you know from the previous post, Tommy couldn’t overcome his degradation from the position of the One and Only which finally caused his premature death. But the other less sensitive cats were able to cope with the newcomer and slowly accepted him in the tribe

Sunnyboy is a very “unconventional” cat, he doesn’t really care what others think about him, US included. He does what he wants to do, he follows his somewhat slow impulses, he overcomes obstacles and isn’t even aware of them, he just IS, without any compromise. Maybe he is what many humans want to become and become able to: living in the NOW, no thoughts about yesterday and none about tomorrow.

Sure, this is easier for cats than for people, but Sunnyboy was really unique in that. I told you about Snowwhite and the grudge she held against other cats? Sunnyboy was the direct opposite. If he had bothered others with his behavior he behaved as if he would say: don’t worry, that’s me! No problem, be happy! And he showed to the whole tribe what cat happiness means:

So let’s collect the ingredients of Sunnyboy’s happiness.

New ways of being a boss? 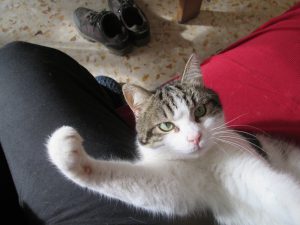 I could go on and on to describe how Sunnyboy sees himself and how he managed to upgrade from “the prince” to “the king” of the tribe. He definitely is the boss now, but a new and different kind of boss. Not the old-style leadership which also in real life is bound to die out. Not the open expression of dominance and power, but the subtle communication of his authentic personality which has no intention to do any harm.

The message of Sunny: 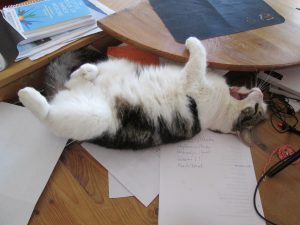 Just be yourself! No manipulation or second thoughts (don’t even know what that means), just be yourself and communicate what you want and what you think would be the right thing to do – and the others will do accordingly or not do, it is not really important. Your position doesn’t depend on that! You know who you are and you will ever be yourself. Your behavior is not bound to traditional roles! You sit or lie around, just how you like, no etiquette, just you, yourself. And everybody adores you for your authenticity and straightforwardness. They treat you in similar genuine ways because they are quite aware that you will be equally authentic when something goes wrong – and that might not be so pleasant.

With other words, Sunnyboy is a unique cat who requires us to put up with his peculiarities. We are truly happy if he grants us his royal presence during our evening meditation, curled in our lap and being sweet and loving. And we know when to not touch him when he is in his special mood of half annoyed playfulness when he enjoys to bite the hands and hold them with the claws of all his 4 feet. He is transparent in his moods and fairly gives us the opportunity to respect them – if not, some other scar on my hand: “It’s your fault! You knew that you don’t need to worry, that’s me!”