Cat-egories and Hair-archies – What your cats can teach you

If you never had a cat of your own or you didn’t give your cat much attention, you will never realize what enormous amount of things your cat can teach you.

Think back in your life: How often did you get angry when your boss was commanding over you or someone bullied you and you felt very bad without even knowing why you got that treatment from others. You begin to tell yourself stories about yourself (I am not worthy, not good enough etc.) or about the other person (he is an idiot, a violent good-for-nothing etc.) and you try to gain your balance back, somehow.

Yes, we humans do that. We want to know the why and we keep thinking about hurtful situations for a long time. We carry this negative energy with us, try to dominate it – and, when we don’t succeed anymore, it bursts out of us and strikes whoever is around. So our accumulated wrath uses a similar situation and explodes on other people who – most likely – have nothing to do with what had originated that strong emotion in ourselves. 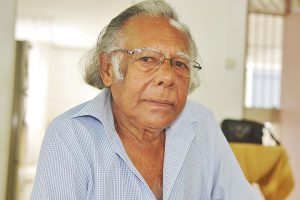 We establish hierarchies in much the same way as animals do. The male animals fight each other until one recognizes the supremacy of the other – and everything goes smooth until a new Tom-Cat challenges the established rules. And the game begins again. Not much different to humans, is it? No.

But there is an important distinction. Humans cling to the past and the future, they mourn their lost place in the hierarchy – and they try to get it back. In former times it was a well-established hair-archy, means the person with less hair (the older) was dominant over the one with fresh young hair. Times have changed, people with light and white hair are not necessarily on top of the hierarchy ladder, they go into retirement and console themselves with leisure activities and remove the anger of being kicked out of their well-deserved spot in society.

Coming to the Cat-egory

Let’s change Cat-egory: What do cats do? Their power – as far as to males – is certainly connected to their youth and physical force with which they can win over the other. The main Tomcat has the urge to defend his territory and so he has to fight – even if his character is not really competitive. (Here I could tell the story of Prince my late red cat – but I will reserve this for another moment). As soon as he is neutered this urge is less because of the missing hormone production and the cat settles down a little. But in most cases, he still will defend his “family” against foreign cats who try to get into command over the female tribe. Similarities to humans? LOL, I don’t know!

Now finally the story I want to tell you today: The FEMALE hierarchy in a cat – and pet – family as observed with my own eyes.

Another story about Snow-White

Schneeweisschen – Snow-white – came to me as a very little kitten (Read a previous post about her here). Against the advice of a vet, she was not sterilized and had babies for many years, most of them snow-white like herself. White became the dominant color in our cat tribe. The non-neutered males seemed to disappear after a year or so and the hierarchy seemed not established – or I didn’t notice it then, or I wasn’t interested yet in the topic. But one day I realized: Schneeweisschen, Snow-White, was the BOSS of the cat community. Whenever she appeared the others strolled away and allowed her the dominant role. 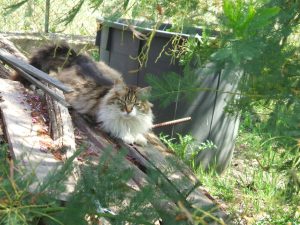 Tommy at the chicken stable

When cats have enough space in nature they go out and claim some area as theirs. So I knew who of them “lived” where in the distance of about 300m from the house. Some were right near the chicken stable, others slept with the sheep, another one was together with the dog, another behind the kitchen and so on. So most of the day everyone could draw back and live in calmness in their own realm.

Then there were times when the tribe came together, in the morning to get some breakfast goodies, during the day to compete for my attention and care, and in the evening for the main meal. Waiting near to each other often provoked some sort of quarrel, but actually, most of the time among the “servants”, while the Queen stood a little apart and waited in her majesty. I began to notice this special role of snow-white and became quite curious about it. 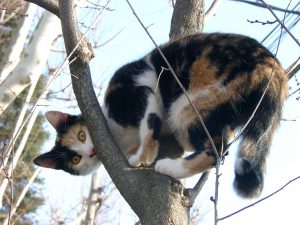 The Queen and the Princess

Once her daughter named “Arlecchino” (“Joker” in English – because of her fur like patchwork in red black and white) gave birth to four black and whitish-colored kittens. It was her first litter and she didn’t seem to know what to do with these little sausages. She stood upright in her cat-basket looking out into the world, the tiny ones at her feet, whining and wanting food. But the mother seemed to not be concerned much about that but enjoyed her princess status waiting for the servants to do something.

Needless to say: no other cat felt the urge to help out. Instead, they hissed at the newcomers as if they were a threat to their balanced life – which, in fact, they were. With every change in the pet family the previously established balance breaks and every individual needs to re-position themselves and find a new equilibrium. I wasn’t very much aware of that fact, then, but all these experiences helped me to understand.

The Queen takes over – a miracle of Nature? 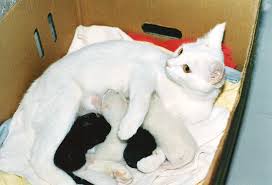 Now the Queen strode into the basket and licked her new grandchildren and took the necessary care for them while her daughter, the princess, sat on her throne and left the work to the mother. In this period it was not very clear who had won the reign, the mother or the daughter. No fights were going on, but the posture was speaking a thousand words. And guess what! After a few days, the grandmother gave MILK to her grandchildren – although she herself hasn’t had any birth in the recent past and so she didn’t have the natural hormones to initiate the milk flow! But it was real, the Grandmother Snow-White nurtured the offspring of her daughter Arlecchino!

Mothers have a recognized dominance in the animal world – not in the sense of male hierarchy, but in what we can call “natural hierarchy”. When danger arises an animal mother defends her nest in most courageous ways, showing physical strength and ferocity which you wouldn’t meet in her when not being in the mother role. She even can fight against the much stronger males in case of necessity.

So, in the case of Arlecchino and Snow-white: was it true that Arlecchino won? Or wasn’t it Snow-white who demonstrated her supremacy by taking over the role of MOTHER although, physically, she was not a mother? Wasn’t that an attempt to REMAIN the Prima Donna on the Cat Stage? I invite you to draw your own conclusions. I know from other events that Snow-white was attached to her power and even more so when she went deaf. Then she exhibited clearly many traces of behavior which you normally would attribute only to humans, like bullying and anger projections.

What you can learn from your cats

I will talk about all that in another moment, I don’t want to bore you with too many words. With this story, I want to invite you to observe your pets and look for behavior which you know well from yourself or other humans. And also have a look how they handle hierarchy and dominance questions: is there some resemblance? Where is it similar and when is it clearly different? You will be surprised by what you will find out. After some years of my life together with many cats, I told everybody that I have learned a lot about humans just by watching my cats!