People say that cats have 7 lives -are you sure?

Today I want to tell you the story of Emma a female ginger cat. When people say that cats have 7 lives, Emma certainly is the exception to the rule. She didn’t have 6 or 5 lives, but just one.

What does “7 lives” mean?
But first, let’s talk about what we understand under “cats have 7 lives”. In my culture – I am German – it means that cats are very strong and survive many challenges. They don’t die easily, they are robust and heal quickly from hurts and illness. My husband has a different interpretation to the saying. He is American and for him, it means that cats are quick and agile and escape easily any danger. So they won’t get hurt easily, they won’t enter into life-threatening trouble. 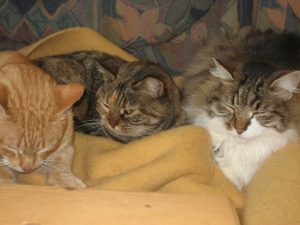 The story about Emma is falling into the first category. She seemed to have overcome all health challenges by her robust nature. Emma was one of five kittens of the first and final brood of grandma Trixi. Her father was Prince, the 3-legged warrior veteran – I will tell his story another time – but at the time of their parenthood, Prince was a wonderful vigorous and proud red cat, then the master of the cat family.

There was a totally black cat in the brood – Trixi, the mother, is multi-colored, so some black ancestor must have come through. Then there was a red and white cat, Luzzy, who has already appeared in this blog. And there were 3 totally orange-red-ginger cats. One of them could give away and I kept two of them. 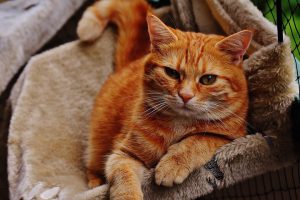 The veterinarian textbooks have no doubt about that. But many years before, my friend Viola in Germany had a red female cat called Emma, called after the red-haired singer Emma Kirkby who is very famous for baroque music and then she was appearing at her music events.
So, after I had convinced everybody that one of the ginger cats was not male, but female, I called her Emma, like the cat of my friend Viola.

Emma was a beautiful kitten, healthy and playful. She developed well, she was a little stout, strong and emanated the joy of life. I often called her a “farmer’s girl” because she reminded me of a girl living in the country, in the open air, red hair and rosy cheeks, demonstrating overflowing vitality wherever she showed up.

I had a lot of cats in those years, my favorite was Tommy, Trixi’s brother. (see both in the photo above). So I didn’t develop a special relationship with Emma. She was around the house, always friendly, never getting into any trouble, just fine. She was an example of what I would call “full live-energy”, looking like LIFE itself, healthy and brilliant in her cat way. I didn’t need to bother about her at all.

Emma didn’t want to eat
When she was about 4 years old, one day in August, I decided to give the anti-worm medicine to all my cats. What a bother! Putting the little pill into something with good taste and pay attention that they eat the pill, too, and not only the good stuff! Many of my cats were very able to totally avoid the pill and make me invent all sorts of tactics until they finally had taken in the drug. The next difficulty was to avoid that others took over the dish destinated to a different cat, and also to keep track of who had already taken it and who not. I had about 15 cats at that time, so you might understand why this was not an easy task.
Emma had been on a chair in the outside area for some days, watching me passing by every now and then, looking at me in a friendly way, not showing any distress of any sort. Now I gave her the drug to eat and there was no reaction. She didn’t even smell on the tasty pieces, nothing! This was strange! So I isolated her in a separate room, waiting for her to eat the stuff. Nothing! And didn’t I hear a rattle in her breath? I hadn’t noticed it before, but now she was under close observation and the strange noise with her breathing became obvious.

I couldn’t believe it!
So I brought her to the vet. Diagnosis: pneumonia. How can anybody get pneumonia in summertime? Very strange, but such it was and I administered antibiotics to her. But instead of getting better she got worse. Her beautiful round body became thin and thinner. I forced her to eat something. I gave her egg yolk and milk directly into the mouth with a syringe. She took some but was not happy with that at all. She seemed to just want to please me by swallowing some little bit, but she really wasn’t willing to eat and get stronger again. 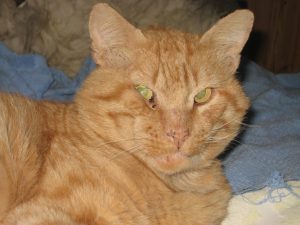 The deep and distant look of Prince

I was desperate, I changed the antibiotics, a stronger dose, but she got thinner and thinner and the cough was noticeable and permanent. And all the time she looked at me with friendly knowing eyes. I had seen these eyes before with Prince when he came home after months and a leg was missing. While most of the cats I had lost before lived outside and just disappeared without trace. But Emma was in the house now, with me, and I tried to help her heal! Then the time came where I couldn’t deny the fact that she was about to die. She didn’t seem to suffer, only the rattle in the breath showed her state. She was calm, lying in the little cardboard box I had prepared for her, and she waited with her deep eyes directed to me which expressed: don’t worry, I know where I am going!

Then it happened
One afternoon I wanted to have tea with some friends on the terrace. Emma tried to pass the open door, she really wanted to go out. She seemed to be vigorous again. But I didn’t allow her to go out. I knew that most animals hide to die, and I didn’t want her to be somewhere out in the woods and then be eaten by other animals. So I kept her inside, stroked her again a little – and after the tea on the terrace I came in the house and she was stretched out there, near the door, dead. Poor Emma! 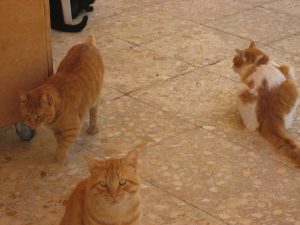 So why could such a healthy creature get ill and die, out of the blue? I was inquiring this question until I found the answer: In that period I was in separation with my borderline husband. He had caused me a lot of trouble, suffering, and exhaustion for years, before I finally decided to separate in order to be able to live again, myself, to be able not only to survive but to create a joyful future for myself. At the time of Emma’s illness, I was in a moment of apprehension because he was about to come back for a few days to get his stuff. I was in fear to be caught again in his spider web of confusion and intrigue power.

I always had compared myself, my strength and my energy to Emma – and so I realized that we were similar, that we were living in the same energetic field and she took over from me the negative destructive energy. So Emma had helped me to live and go on by taking over the part of me who was dying when together with that person. 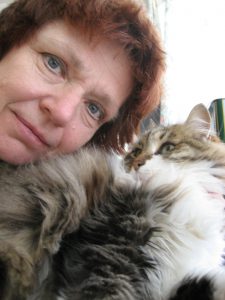 My life went on with Tommy – thanks to Emma

It is well known that animals have the capacity to take over human energies and process them for their humans. And this is not only true for animals, also humans, called “scapegoats”, take over stuff of others and handle it for them, mostly in totally unconscious ways.

So Emma allowed me to live my life by sacrificing hers.
Thank you, EMMA!