In the last blog-post I told you about Oli, the stray cat which appeared in my home, deadly ill, and I took him to the cat hospital. Today I want to show you the moment when he could leave the hospital and how he finally arrived in our paradise, our home which is called “Paradiso Integrale”. 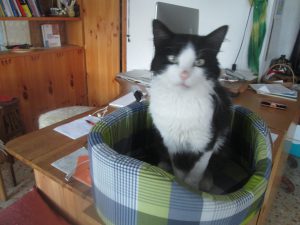 Oli the ex-stray cat, sits on my desk near where I am writing his story

While I am writing this, Oli is sitting right on my desk in front of me! He has survived and seems to get better, finally! It was 3 weeks ago that he showed up here and I promised him to save his life if he would show up on Monday morning – which he did. Please read the first post I wrote about him with the question if YOU would let him die?.

And also the first part of his recovery story here in this website.

And here some moments in the cat hospital on video

At home in Paradise

The first 10 days we kept Oli in a separate room to not overwhelm the pet family. It is very important to allow all members of the family to slowly enter into contact and to figure out a new equilibrium in the tribe. So Oli had his food and his litter box downstairs. He still swallowed the food like crazy every time I brought him some. He allowed me to stroke him and we had deep eye contact. And one hour a day we allowed him to come up into the living room where all the other pets were and we observed their reactions.

Sunny, the young male “prince” rejects the newcomer totally, doesn’t want to have anything to do with him, he is “pissed” and he lets us know clearly that he disagrees on any other cat, as he has already to share us with other four.

Kittie, the blind cat, very quietly explores the new situation, and she doesn’t mind too much – as long as she feels safe. Watch the video below of their first encounter.