The cat who came in from the cold

The cat who successfully entered into the indoor circle

We humans like to have a warm home in winter, right?  We think that animals have fur and therefore don’t feel cold. Wrong! Today I want to tell you the story of the cat who came in from the cold – after 13 years of putting up with all the nuisance of a life outside in the country.

Mundl, or Rosenmund, the RED cat

His name is Rosenmund, (“Mouth of roses” in English) and in its short form: “Mundl”. Since Mark his living here with a certain linguistic difficulty regarding German expressions Mundle has become just “Red”, as his fur is a fiery orange-red, and it is so much easier to pronounce.

Trixi and her breed 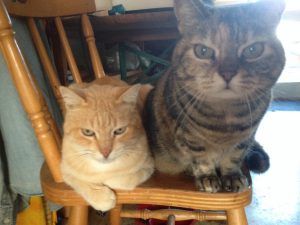 Well, Red is one of the 5 children of Trixi, a brother of Luzzy who, too, has already appeared in this series of stories. When these cats were born about 13 years ago my animals, except Tommy, lived outside the house and were not allowed to come in. Everyone of them found some special place in the property where they could stay warm in the winter. Who slept in the sheep stable was Morle and her son Filippo, while Luzzy and brothers were mainly around the chicken stable and the storage rooms where I had put out baskets with woolen beddings. No problems with the cold, especially as Italian winters mostly were not so cold, hardly under 0°C.

Then, during the years, I became less rigid in chasing out the cats when they happened to end up inside the house. They had found out that the good food came from inside and so, probably, they wanted to remain on the watch for goodies in summer. And in winter, well, a warm place is not bad. Since Mark is living here with his big caring heart for kitties, he took care that everyone was in and comfortable – and the amount of cat litter boxes rapidly increased in our household. (Fortunately it is him to take care for them, lol)

Entering the house – who is allowed?

Everyone began to use our apartment as their rightful home – except Mundle, or Red. He came to the open door, stroked his cheek against the frame, did some little cat dance, but didn’t dare to come in. He knew his place, and that was outside. And although all the other cats were in and although he was invited, he just wouldn’t take the chance. This went on for a couple of years.

One day, coming into the house, I saw a red arrow fly out of the open kitchen door. So Red clandestinely had come in and fled in the moment of discovery like children who get surprised in a place where they had not been allowed to be. For many days Red kept staying far from the house as if he felt guilt or shame for having behaved in an improper way. How could he understand that he was allowed to come in, especially when the winter came near?

It took a lot of loving encouragement by Mark to convince the timid red guy that it was ok to be inside the house. It was interesting to observe how Mundl -Red – became ever more confident and lost his latent fear all together. Now it is real winter here and Mundle literally is the cat who came in from the cold. Now he is happy to not only sleep inside at night, but also hang around during the day.

When the constellation of the pet tribe changes

But with Mundl’s  presence in the house other problems arose which needed to be solved in the cat tribe. As mentioned in other texts the pet family is very sensitive to any change in their community. At the beginning King Sunnyboy made very clear who was the boss in the house. No problem, Red is a more submissive cat and didn’t mind to leave Sunny’s top position unchallenged. Trixi was not happy about another new cat near her – although he was her son. But she, too, understood that Red is not bothersome and she chose to just ignore him. With his brother Luzzy there seems to be still some family ties left and every now and then you can find them stretched out near to each other and purring together. There is still the blind cat Kittie who is considered as “rather strange” by everyone, tolerated whenever she behaved in unusual ways, but altogether not seen as a thread. So if Red just makes a huge circle around her, nothing unpleasant would happen.

Waiting for our cats to form a choir, lol.

Since Mundl lives a good part of his life inside the house where the food is always available and, not having the need for many calories to keep him warm in cold periods, he has lost his slender and boy-like form. He has gained weight and looks now like a serious cat. He begins to resemble his father “Prinz” whose story I will tell some other day. Just to let you know here that Prinz was a real Tomcat, big head and strong body – and red-orange everywhere with nice dark red striped mantle. Now his almost 13 year old son begins to resemble him a lot – and he awakens memories in me and the lives of so many cats who ate from my table, so to speak.