The Heroic Life of Fat Black 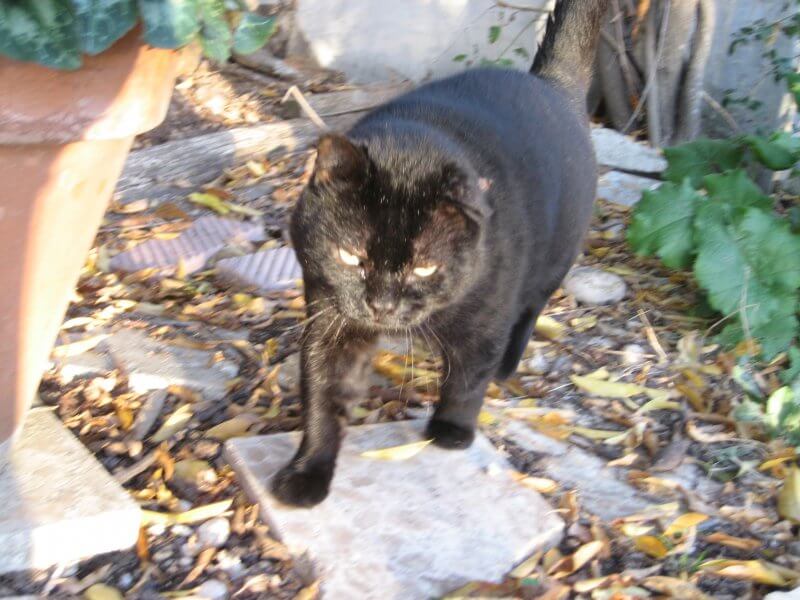 Certainly, “Fat Black” hasn’t always been his name. To the contrary, he has changed his name several times. He was born as one of the five kids of grandma Trixi as the only black one in a litter of red and white kittens. Initially, he was called “Nero”, the Italian equivalent for black. Then, one day in summer, I noticed his fur becoming brownish and so I called him “Marönchen”, coming from “maroon” (“marone” in Italian) with the German ending “chen” for something small and nice. And this name mutated into the short form “Rönly”, again an endearing and diminutive expression for that cat who, in the meantime, had become a noteworthy Tom cat – not small at all!

Then the language in our house changed to English with the arrival of my American husband who certainly wasn’t able to pronounce “Rönli” properly – and Fat Black was re-baptized, according to his obvious dimensions.

So why was the life of Fat Black heroic? It all boils down to his refusal to submit to what I believed would be best for him. Before him, I lost many Tom Cats after a year or so because there can be only one cat-boss in a tribe. Non-neutered males don’t normally share the territory and therefore they enter into terrible fights for supremacy, and finally, the loser leaves. I was so fond of my cats whom I had seen grow up and I didn’t want to lose more – and therefore I started to neuter them. 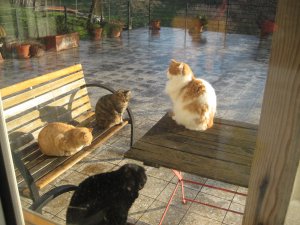 Trixi and some of her children

In Fat Blacks litter there was one red female cat, all the others male. I started to take them to the vet, one by one. When it was Fat Black’s turn I got the first confirmation of his libertarian character: He resisted violently my attempts to put him into the transportation cage. Although I wore a thick jacket and gloves to avoid being hurt he found a way to escape – by jumping into my face and scratching across my eyes. Success! I immediately gave up in order to find out if my eye was hurt, but fortunately, I only had a big scratch from my forehead to my cheek. Needless to say, I gave up on him for that time and for quite a while afterward. 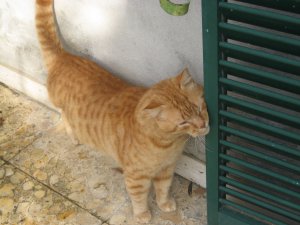 The main Tomcat, Prince, was away from home for very long periods and so Fat Black became something like his replacement and stayed home while the other was gone. They somehow got on when home together, maybe the father-son relationship helped, and Prince was not a Tomcat by passion but only by necessity. (Read the story of Prince and his adventures here)

One day I noticed that  Fat Black’s cheek looked like a pyramid but there was no way for me to touch him to have a look. He had become quite diffident and wild, he didn’t want anybody to touch him, least of all me, as we had had some negative experiences together. I managed to close him in a utility room over night and in the morning I saw the mess: whitish liquid poured out of his cheek. That meant he needed to go to the vet. But how? I had been able to prevent him from fleeing whenever I opened the door and, believe me, that was not easy. I used a towel and a broom to keep him away from the promised freedom outside the door.

When I came back into the room with the transport basket, Fat Black hid between the wall and the washing machine. I intuited the chance and put the basket in a way that the only possibility to get out of the hiding place was to jump over the basket – or enter into it. The dance began. I tried to push him towards the basket – not an easy thing to reach behind the washing machine from above, and at the same time take care that he didn’t jump up and out. I was alone, maybe in two or three, it wouldn’t have taken full two hours until he was in the basket and I succeeded to lock him in. We both were exhausted and recovered a little during our 20-minute ride to the vet.

My favorite vet was in holidays, so her colleague treated the cat – which, at the vet, was almost calm and docile. Well, not really, but…. He got a little plastic tube into the cheek to drain the liquid and an injection of a potent antibiotic. I wasn’t sure at all if I would manage to administer the antibiotics at home, but I found a trick with pulverized pills in super good food, minced meat or fish. Well, this seemed to work out and the wound began to heal – after Fat Black had extracted the drainage himself. Too early to celebrate! As soon as the delicate new skin appeared under the crust, Fat Black scratched it open again and again, a never ending game which took months until it finally could heal. All my attempts to accelerate the healing process were useless as I was not able to touch him at all. 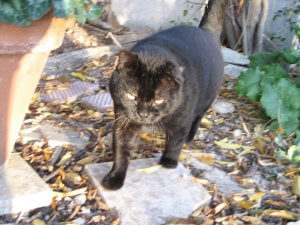 Fat Black in his territory

Too bad that I forgot to ask the vet to neuter Fat Black this time. He escaped neutering also the next time when he had to undergo surgery for another wound from male contests. I had given up on it altogether, after 3 failures it seemed to be just “not the case”, or, maybe, “the will of God”. And, by the way, that time it took me only one hour to get him into the basket. I had trapped him behind a wardrobe and the only exit was the cage. I was getting better at that, plus I gave him sedative drops in his food – which sometimes took him a day or so until he ate it: he smelled the trap, I guess.

And then came the biggest challenge: Fat Black got white ears, or better, he lost the black fur on his ears. First the ears, then the forehead. He became bald and looked really deplorable. (Unfortunately, I didn’t take any photos to share this with you!) One thing was clear: he needed to go to the vet, again, and the old dance would start “da capo”. The normal dose of the sedative was 20 drops. I gave him between 60 and 80, always fearing to overdo and cause some damage. But no worries: with 80 drops I finally was able to grab him, dressed like a bee-keeper to avoid being hurt, and I succeeded to put him in the cage, not without significant refusals and protests.

Fat Black had an infectious disease, mange, and he needed a daily medication for 4 weeks. That meant that I needed to keep him closed in a room for all that time. As I said, he was quite a wild cat and didn’t like at all being closed up inside. He tried all forms of protest, from peeing everywhere to scratching the door until he could open it. I had to add an additional hook on the lower part of the door so that it wouldn’t succumb to his violent attacks, but don’t ask me how the door looked like after 4, or better 6 weeks.

How to manage a cat who loves freedom over everything?

The access to that particular room had 2 doors, so it seemed more secure. But still, Fat Black succeeded to escape one day, into the other rooms of my flat and from there out into the countryside. I scolded myself of not having closed firmly all the many doors which lead outside. Now he was out and certainly didn’t come back the next day to get his medicine. What to do?

First of all, I eliminated all sources of food outside my flat in ways that whoever was hungry needed to come inside. This worked for all the other cats, there were about 10 in the tribe then, but not really for Fat Black. Only after a week did he show up again and I managed to close the doors behind him – an act of planning, attention, and acrobacy, as he was diffident 100% and always ready to escape. Finally, back in his room, I fortified it into a more secure prison – and we had to begin the treatment from scratch: 4 weeks medicine and the cat closed in his room, alone. I felt real compassion for him and decided to, at least, spend the night with him.

So I moved into his prison for the night hours and after a few weeks he came up and slept on my bed; an unexpected friendship began and he became softer and allowed me to touch him. Soon he discovered that being touched feels quite nice and from then on he came to get his daily dose of stroking. What a change! Not alone caused by the nights together, but also by the fact that, finally, he was neutered and his wildness diminished considerably during the following years. He, as his name indicates, also lost his slender appearance and gained weight, but it didn’t really matter. He became a friendly presence in the tribe, staying mostly on his own, avoiding the other cats, but coming over to us humans for a friendly greeting.

A smile that says good bye

Fat Black’s territory was the front side of the house. Here he lay in the sun on our bench, he hid under the oleander bushes or walked towards the chicken stable for his own, but innocent, reasons. (Cats get along with chickens, whose main enemies are the fox, the marten, and the weasel.)

One morning he walked right through the backyard on the other side of the house. He looked at us and I seemed to see a smile on his face. I was quite touched but forgot about it – until I noticed that he didn’t appear for dinner, nor the next day, nor the next week, never again. We looked for him, everywhere. He might have been closed in a room – or even in a switched off fridge where I lost another cat, Mira, by not noticing that the door had closed while she was inside…

The long explanation short: Fat Black didn’t appear again and only about 2 months later we found him, curled on himself, in a dark cellar, already halfway decomposed. He got a special death ritual and a burial in the midst of previously defunct family members. I was grateful for his smile when he came by to say his goodbyes, the last time we met him. He was a really sweet and exceptional cat who had lived a heroic life of transformation from a wild and detached fighter to a sweet and peaceful soul.

6 comments on “The Heroic Life of Fat Black”