The Emergence of a Political Cat – by Steve Walker

TWOTOES HIDING UNDER A DOOR WATCHING OTHER CATS GO BY 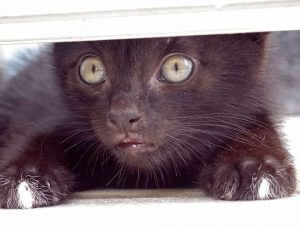 TWOTOES HIDING UNDER A DOOR WATCHING OTHER CATS GO BY

When we thought he was a SHE Twotoes was a mild-mannered funny little character who liked to pose for pictures, but starting from the moment we properly identified him as a tomcat Twotoes turned into a pugnacious battler. Here she is moments after a major wrestle-tussle with the biggest tom kitten Fourpaws to decide who was top cat. Socially it was a draw but sportingly Twotoes was ahead on points. 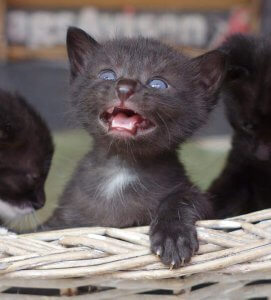 Some of the ten kittens I hardly see all day: they are not too interested in me except at food times. Others have me as the center of their activities: Orson and Backpaws sit on me all day. Twotoes is alone in a third category: he rockets into me for a play session then is gone for half an hour in fight, training, and networking, then appears somewhere doing something that is meant for my camera. He is the best model of the bunch by far.

My use of ‘networking’ may be a big clue in understanding how Twotoes‘ mind works. We are perhaps seeing the emergence of a political cat. I have known them before. Miss Juliet of the tumbledown Hotel de la Paix is one. Twotoes is building the foundation to be the leader of the pride by checking in with every other cat. He does not yet know that the complex pride here will be broken up as the kittens are adopted, himself included. But he will be a top cat wherever he goes, whereas big Fourpaws has no such nature and though he will be a dominant tom he will do so by a natural expression of strength. Backward suddenly realized one morning he was a top cat type and announced it to one and all. Twotoes has always known. 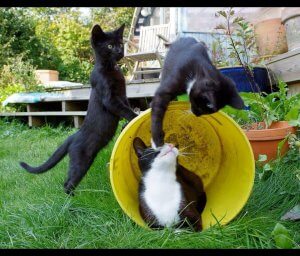 Three of the tribe

Another inputting to Twotoes character is that he has grown up with two mothers. Though he is Sortemis‘s son he was reared also by Coco. His other mother preferred him to her own kittens, chose him from his early days as her own. In this picture, he looks like Coco and her unusual looking kittens, not like his own littermates. Something in Coco‘s milk must have influenced his DNA and given the young poser an extra level to himself. So as he hides watching the other cats go by his developing mind could well be looking with a complex awareness his siblings and cousins do not possess. But they all suckled from two mothers, if not with the special rank of Twotoes, so it could be this gifted them all a sharpness each in a different power. One thing for sure: when I take photos of Twotoes he knows something of the process; the others, however cute and characterful, simply don’t.

This text and all the photos are provided by Steve Walker. Visit his Website here