The Misfortunate Life of SnowWhite, the Legendary Cat. 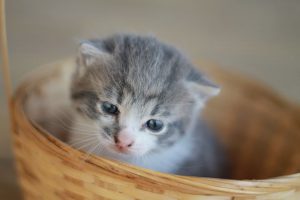 A gray kitten like the one we found in Todi

On a sightseeing tour to Todi (in Umbria/Italy) we found a breed of tiny cats in an ancient stone container alongside the church. The priest urged us to take home one, at least one, and so I took a tiny gray creature. In those days I didn’t know much about cats yet and so I put the kitten into a basket near the entrance to my house for the night.

The next morning my dog Pezza came and showed me her trophy: a gray bundle hanging from her mouth. Obviously, she had played roughly with the now dead kitten, and Pezza seemed to regret it a lot. It is difficult to play with something which is not moving, at least for dogs.

The arrival of SnowWhite

I was very sad that day, wouldn’t you, too? But the next day my partner brought home a little furry something, as white as snow, and the legendary cat SnowWhite began her heroic and often misfortunate life in our house.

She gave us, too, a lot of trouble, right from the beginning.

Fearful that a similar thing could happen to her, I kept track of her all the time. Our life was spread over separate buildings and courtyards, so it was easy for any cat to hide. That’s why I tried to keep little SnowWhite in the kitchen. One afternoon we couldn’t find her anywhere. I became desperate as the hours passed. All possible places had been checked many times. Nothing! Finally, I prepared dinner and when I started to set the table I opened the silverware drawer – and in there was SnowWhite! How could she end up there, one meter above the ground? Well, we reconstructed the route she must have pursued. At a certain moment, she had been lying on my knees which were under the table. So she must have climbed up to the hidden back side of the drawer and crept into the small open space there – and she must have slept silently all the hours we were desperately looking for her. All’s well that ends well! So far. 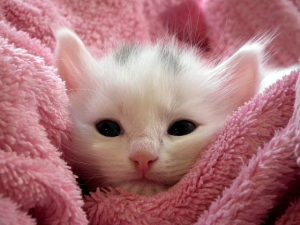 Some weeks later SnowWhite, still a kitten, encountered her first misfortune. A piece of tree trunk fell over, right on her. She was not injured on the level of her fur but the inside tissues were broken and her guts popped out under the fur. So she had her first surgery at about 2 months of age and the vet highly recommended we neuter her as the scar tissue might not allow her to have a successful pregnancy. You know already that she become a manifold grandmother, so this malediction didn’t work out.

In pet families, like in human families, there is not always harmony and peace. Often the dogs feel called to interfere when the cats have an argument, and dogs often are not very measured in their response. Well, one day the cats had a heavy fight, the dog intervened and obviously didn’t have full control over where to stick his mouth. So SnowWhite ended up with a hole in her throat where the dog’s fang shouldn’t have intruded as it did. No bloodshed, but a hole of about one centimeter which needed to be taken care of.  So SnowWhite was under sulfonamide and antibiotic treatment for the second time in her young age. It didn’t seem a problem then but later it definitely became one. But first things first.

How SnowWhite taught her husband what to do

SnowWhite got pregnant and had 4 wonderful white kittens, one with some red, from its father, Emir, a red cat who was a little younger than her – and had to learn how to make babies with her rigorous help. It was highly amusing: he understood that she wanted him to do something, but he didn’t know what. He first tried to mount her the other way round which prompted a slap from SnowWhite. Poor guy! Even animals have to learn how to properly handle their instincts. Anyway, Snowwhite had kids and continued to have them, once a year, first four at a time, then less and less. 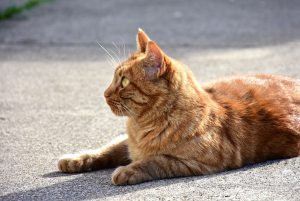 They are were offspring of Emir who was the only cat she ever allowed to be near her. (read here)She didn’t particularly like to be a mother. So when the kids were grown enough she sent them off, but as you can read in the story about Arlechina, she sometimes helped out as a good Grandma. (read here)

The special challenge for white cats

After some years the tips of her ears became red, later they curled around and really looked horrible. Pallino, one of her offspring, had been the first one to need surgery for his ears – I haven’t talked about that yet in the story about him -, so I knew it was time for surgery also with Snowwhite. 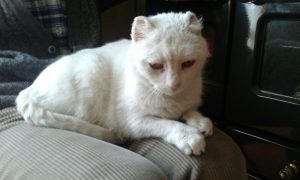 That’s how SnowWhite looked like after surgery (photo credit Dr.Scorzoni)

By that time I had found my present vet, Dr. Scorzoni, and she, very gently and lovingly, did the surgery in a way which didn’t impact the SnowWhite as it had Pallino. So SnowWhite had a new look: round ears instead of long ones. She certainly didn’t care and the cancer of the ear tips could be stopped, at least for quite a while.

The end for now – but the story continues

In German, we have a saying: “all good things come in threes”, so as to say that one misfortune will be followed by at least two more. Snowhite carried many more. Do you want to see what was number 4? Join me in my next post where I will also talk about the parallels between humans and animals, especially with our beloved cats.