A stray cat appears at my door

For nearly a year now I have had a stray cat, which arrived at my house undernourished and terrified of everything. It took at least three months of coaxing and food to convince her that I was not going to hurt her. She slowly gained confidence and started to eat whilst I was present and eventually she dared to approach me and allowed me to touch her.

FInding the right place in the family 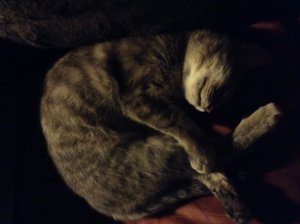 After a further few months she actually decided it was safe to enter the house where she met my other elderly cats of which one was very jealous and the other accepted her presence. The first cat has since died and she has made friends the the surviving elderly one (17 years). it was obvious from the beginning that she was extremely good at making an effort to let the other cats know that she considered them to be the “boss” and never pushed her luck although it was also obvious she was desperate to be accepted into the “tribe”. She obviously acknowledged their seniority.

Love and gratitude for having a home and a “mom” 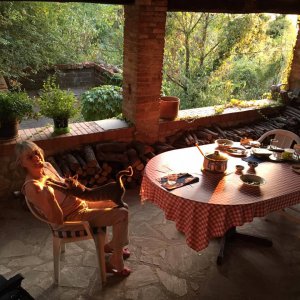 She is an extremely intelligent cat and still shows plenty of independence in as much as she prefers to spend the nights outside and I am sure she does a lot of hunting. The rats around the house have by now all disappeared. Despite still being slightly wild (she does not really trust people she does not know) she is the most affectionate cat I have ever had and shows her love and gratitude in the sweetest way. See pictures!

It is as if strays who probably would not have survived by themselves, realise how lucky they have been and then become such marvellous and faithful companions.